Tearaway England pace bowler Jofra Archer is looking at a return to competitive cricket during the ICC T20 World Cup later this year, as the strike bowler said on Friday that he had fully recovered from a second elbow surgery and needs some "game time" to be back in peak fitness. 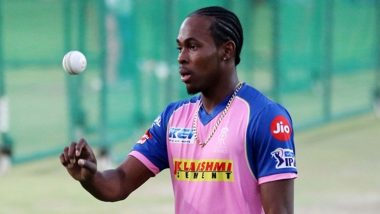 Mumbai, May 6: Tearaway England pace bowler Jofra Archer is looking at a return to competitive cricket during the ICC T20 World Cup later this year, as the strike bowler said on Friday that he had fully recovered from a second elbow surgery and needs some "game time" to be back in peak fitness. Archer -- who was bought by five-time Indian Premier League (IPL) champions Mumbai Indians for a whopping Rs eight crore during the mega auction but will not play this season for the franchise as he continues his rehabilitation from the elbow surgery -- was forced to miss the last T20 World Cup in the UAE due to an elbow injury, and England -- without the spearhead of their attack -- failed to reach the final as they were beaten by New Zealand in the semifinal. DC vs SRH, IPL 2022: Did Not Need Extra Motivation To Bat Well Against Sunrisers, Says David Warner.

After missing the entire IPL 2022 season, he will also likely return to action for the embattled Mumbai Indians -- who are down in the dumps -- next year. But before that, the world's second-ranked T20I Men's team may have their leading quick bowler back for the next T20 World Cup in Australia later this year, with Archer announcing that he is set to make a comeback for his county side Sussex in England's T20 Blast later this month. The 27-year-old has undergone two surgeries in the last 12 months on an elbow injury that has kept him out of all international and franchise cricket. And he says that he now feels well on the road to recovery.

"After my first operation last May, my right elbow felt no different at all," Archer said in his column for the Daily Mail. "Obviously, I wasn't going to fully know whether it had been successful until I started bowling, but what I can say is that things immediately felt different after my second one in December. Now, nearly five months down the line, it's a relief the way things are. "Yes, there have been two surgeries, but honestly I couldn't have written my rehab comeback any better," said Archer. IPL 2022: Umran Malik Needs To Be Nurtured With Care.

"Now I just need some game time to be able to put my trust in the elbow. I've not trusted it supporting me for a long period, so it's going to take a little bit of work to do so and bowl at full tilt. That's the hurdle I am trying to get over now, to get myself out of that comfort zone and to full capacity; to have the confidence to play without thinking about the injury. "What I can say is that I've been building up really nicely and bowling some really quick balls, so there's no doubt I am not far away," he added. For all of Archer's success in T20 franchise cricket and in England's ODI team, he has featured just 12 times in total in T20Is. The England bowler has even played one more Test in his fledgling long-form career, taking 42 wickets in his 24 Test innings with the red ball.

But new England Test captain Ben Stokes is unlikely to be able to recall Archer anytime soon, with the player intent on building himself back up before tackling the challenge of playing across all formats. "I still want to play everything, but my first task is the Blast and if I don't play that properly, then I won't be able to play Test cricket," Archer said. "I am not setting ambitious targets just yet. I am aware there is a T20 World Cup this coming autumn, but I just want to be out there having a good run," he added.

(The above story first appeared on LatestLY on May 06, 2022 11:09 AM IST. For more news and updates on politics, world, sports, entertainment and lifestyle, log on to our website latestly.com).