His determined innings may have given the impression of it being a grudge match, but Delhi Capitals opener David Warner took it as a regular match and did not need extra motivation to do well against his former franchise Sunrisers Hyderabad. 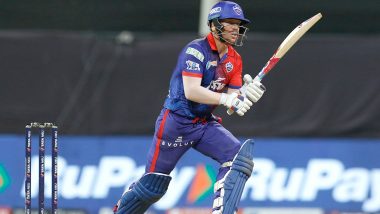 Mumbai, May 6: His determined innings may have given the impression of it being a grudge match, but Delhi Capitals opener David Warner took it as a regular match and did not need extra motivation to do well against his former franchise Sunrisers Hyderabad. Warner and Sunrisers had an acrimonious parting at the end of the IPL 2021 season when the Hyderabad franchise dumped him as captain midway through the season and dropped him for the last few matches when the lucrattive tournament moved to the Gulf due to the Covid-19 situation in India. IPL 2022: David Warner Sets Record for Most T20 Half-Centuries, Achieves Feat During DC vs SRH Clash.

On Thursday, Warner and Sunrisers Hyderabad faced off for the first time and the 36-year-old Aussie responded with an unbeaten 92 off 58 deliveries, hitting 12 fours and three sixes. Delhi Capitals won the match by 21 runs. "I didn't need extra motivation. We've all seen what happened before in the past. It was just good to get the win on the board," Warner said of the grudge match. About his innings, he said the pitch was nice and true and he knew that it he played his shots, they were going to come off with a good score. DC vs SRH, IPL 2022: Rishabh Pant Praises David Warner for His Brilliant Innings Against Hyderabad.

"I think when you rock up here and look at that wicket, it's a really nice wicket. It doesn't matter if you bat first or second, you know it's going to be nice and true. I had some success here and knew if I played my strokes, didn't think about hitting gaps but just hit the ball and watched the ball, it was going to come off and fortunately it did," said Warner during the post-match presentation.

Warner, who was declared 'Player of the Match' for his superb innings, said he gave the strike to Rovman Powell towards the end as he was 'cooked' towards the end of his knock. "It's challenging here with the humidity of Mumbai. I was cooked at the back end. I'm getting older. Having Rovi at the other end, he's got some serious power to clear the fence. It was amazing striking and I was glad he was at the other end," said the Australian.

(The above story first appeared on LatestLY on May 06, 2022 10:59 AM IST. For more news and updates on politics, world, sports, entertainment and lifestyle, log on to our website latestly.com).