Cristiano Ronaldo has impressed so far with his goals in the 2018 FIFA World Cup. 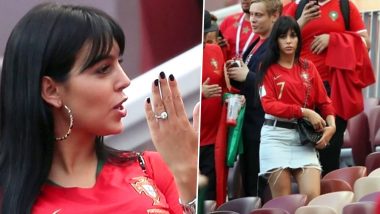 Cristiano Ronaldo has impressed so far with his goals in the 2018 FIFA World Cup. Yesterday, Portugal forward scored one goal against Morocco at the Olimpiyskiy stadion Luzhniki and led the team to victory by 1-0. Along with the fans, Ronaldo’s girlfriend Georgina Rodriguez too was seen cheering for the star footballer.

Several pictures of the WAG at the stadium went viral. Georgina was seen donning Portugal’s jersey even though she is Spanish. But what caught our attention was the big sparkling diamond on her finger. This spark rumours about the football star being engaged to his girlfriend. As per the SunSport, the ring is said to be £615,000 Cartier piece that the football had purchased last month. Usually, she is seen cheering her beloved with her children but this time was seen enjoying the match alone. Check out a few pictures.

Here are another set of pictures.

After the game, Ronaldo said that the team needs to improve. "Our expectation is to continue our work and try to improve in the group phase," Ronaldo said after his fourth-minute strike decided a hard-fought encounter in Moscow. We're almost there (knockout stages) and then we'll see. We'll take things match after match. We will try to come first in the group. We knew if we lost we could be out. We knew Morocco would be giving their all. It was a surprise at the start because they were so strong. I managed to score a goal, it was great for me.”

(The above story first appeared on LatestLY on Jun 21, 2018 01:22 PM IST. For more news and updates on politics, world, sports, entertainment and lifestyle, log on to our website latestly.com).