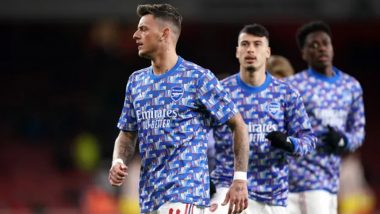 Arsenal might have failed to book a ticket to Wembley as they lost to Liverpool by 2-0 in the Carabao Cup 2022. But surely their kits made the nose. The Gunners were seen wearing newly launched kits. The blue shirts are inspired by the seat fabric on Piccadilly line Tube trains that operates through Arsenal train station. As we all know Arsenal is the only team that has a tube station named after itself. The station was originally called Gillespie Road that was changed after constant efforts from legendary manager Herbert Chapman. Arsenal vs Liverpool Result & Goal Video Highlights, EFL Cup 2021-22: Diogo Jota Brace Takes The Reds into Carabao Cup Final.

Emile Smith Rowe and Thomas Partey were pictured with the new kits on the official website of Arsenal. The team had worn these kits during the pre-match and surely they looked super good. The new kits got a mixed reaction from fans. The pictures of the team donning the new kits were also shared on the official account of Arsenal. However, more than the kits what made news was the result of the game wherein they lost 2-0. The aggregate score was also 2-0. For now, let's have a look at the pictures of the team below.

(The above story first appeared on LatestLY on Jan 21, 2022 06:58 PM IST. For more news and updates on politics, world, sports, entertainment and lifestyle, log on to our website latestly.com).