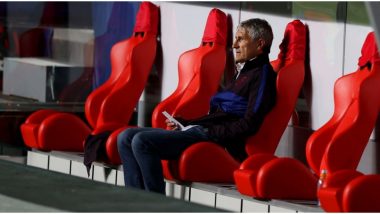 Barcelona are set to sack coach Quique Setien as their head coach following a humiliating 8-2 defeat at the hands Bayern Munich in the UEFA Champions League 2019-20 quarter-finals. The loss eliminated Barcelona from the UCL and made four consecutive seasons now that they have conceded three or more goals in games that confirmed their exit. Reports suggest that the decision has already been made and will be announced in the next couple of days. Barcelona ended their 2019-20 campaign trophyless. First Lionel Messi and Then Own Goals: Humiliating Record Shows Barcelona Depend More on Argentine and Opposition Own Goals After 8–2 Defeat Against Bayern Munich.

Setien, who was roped in as the head coach in January, failed to guide the side to a single trophy in his eight-months at the club, which also saw Barcelona concede the lead to Real Madrid in La Liga title race and fails to defend the trophy before abject suffering against Bayern in the UCL quarter-finals on Friday. After the La Liga disappointment, Champions League remained their only chance of a silverware this season but the humiliating loss means they have ended the season without a trophy for the first time since 2007-08.

The 8-2 surrender was the final nail in Setien’s coffin and he is expected to be replaced by Xavi Hernandez, former Barcelona and Spain midfielder. Reports, however, suggest that decision to replace Setien had already been made prior to the Bayern game although the result only confirms his unceremonious exit.

Barcelona have already decided to sack Quique Setién after the terrible defeat against Bayern Münich. He’ll not be the manager on next season. 🔴🔵 @SkySport #Barcelona #FCB

Setien had replaced the outgoing Ernesto Valverde in January earlier this year. Valverde was sacked after Barcelona’s exit from the Spain Super Cup but they were still leading the La Liga title race and also were alive in the Champions League and the Copa del Rey. Under Setien, the club lost to Athletico Bilbao in the Copa del Rey quarter-final and then conceded their lead to Real Madrid, who went to win the La Liga.

Reports indicate that Setien has had differences with some of the players right from day one and that players don’t trust his tactics. Meanwhile, transfer guru and Sky Sports journalist, Fabrizio Romano confirmed that Barcelona have sacked Setien after the Bayern loss. “Barcelona have already decided to sack Quique Setién after the terrible defeat against Bayern Münich. He’ll not be the manager on next season,” Romano’s tweet said.

President Josep Maria Bartomeu also told the media that changes will take place next season and that the club have already started making some. Although he refrained from revealing any of those proposed changes. The Barcelona chief also evaded the question if Setien is to be sacked but reports in the Spanish media suggest that the decision has already been made to sack him.

Barcelona are looking for their next coach to be a big name that commands respect. Mauricio Pochettino, Xavi and Ronald Koeman are said to be the front-runners. Among them, Xavi had already signed a one-year contract extension with Qatari club Al-Sadd while Koeman is the current head coach of the Netherlands national team. Pochettino though has been out of a job since being sacked by Tottenham Hotspur in October.

(The above story first appeared on LatestLY on Aug 15, 2020 10:02 AM IST. For more news and updates on politics, world, sports, entertainment and lifestyle, log on to our website latestly.com).