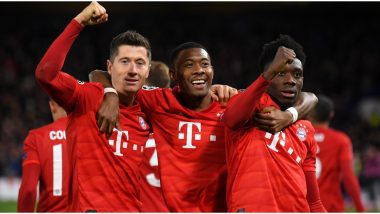 Berlin, July 30: Bayern Munich's left-back Alphonso Davies is full of determination when talking about this season's Champions League campaign. Ahead of the last-16-round second leg against Premier League side Chelsea on August 8, the 19-year-old Canadian told Xinhua news agency in an interview, "things somehow start from the beginning when we face a confident Chelsea in the re-match".

The German record Champion isn't taking the Blues lightly despite their 3-0 lead achieved in the first leg in February. Davies said Bayern is sufficiently concentrated to make it to the next round despite the long break caused by the COVID-19 pandemic. Adidas Reveals Ball for UEFA Champions League 2020 Knockout Stages.

"We can win this season's Champions League campaign, but don't think about the following games. Chelsea is coming first," the former winger commented. Davies admitted that the 2020 German Champion remains one of the favorites to win this season's campaign. The starting point is more or less the same for all participating teams, the Bayern professional said.

The final (last-8 to final) round will be played in a tournament mode from August 12 in Lisbon. The final is scheduled for August 23. Last week, his side returned to action after the national league finished its season on June 26, followed by the German Cup final on July 4. The Bundesliga was the first European league to re-start its interrupted season.

"You can't tell if it is an advantage to have had a break or not. You can say that the season doesn't feel like finished for us," Davies said. The entire team is determined to add the missing piece to a so-far successful season with the Bavarians taking the national double.

"We didn't party a lot, far from that. Everyone knew we still need to continue to get the thing done," he emphasised. Football has always delivered surprises after first-leg games, he underlined. Therefore "we know we can count on a lead but at the same time are aware we face another tight 90 minutes against the Blues".

(The above story first appeared on LatestLY on Jul 30, 2020 08:59 PM IST. For more news and updates on politics, world, sports, entertainment and lifestyle, log on to our website latestly.com).