Chelsea vs Manchester United Premier League 2020-21 match will be played on February 28 (Sunday) at Stamford Bridge. The game is scheduled to begin at 10:00 pm IST (Indian Standard Time). 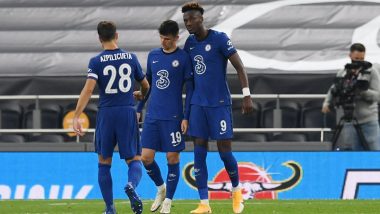 Chelsea have a massive game coming up against Manchester United at the Stamford Bridge which could have far reaching bearings on the outcome of the top four race. The Blues are currently fifth in the league table with 43 points from 25 games. They had a minor blip against Southampton in the previous game which ended their four game winning run. They were brilliant against Atletico Madrid in Europe where their solid defensive game brought a positive result. Second placed Manchester United are 13 points off league leaders Manchester City with the title race done and dusted. The Red Devils will be targeting a victory against Chelsea at a venue they have done well at in recent pasts. La Liga 2020–21 Match Result: Barcelona Keep Title Hopes Alive With 2–0 Win Over Sevilla.

Chelsea will be without the services of defender Thiago Silva as he recovers from a thigh injury. N’Golo Kante could be given a start in place of Jorginho to keep a check on Bruno Fernandes and Fred. Olivier Giroud scored a world class against Atletico Madrid and his confidence would be sky high at the moment as he leads the home team’s attack. Behind the Frenchman, Mason Mount and Timo Werner should line up as the attacking midfielders.

Scott McTominay and Paul Pogba continue to remain sidelined for Manchester United while there is some positive news on Donny Van de Beek with the Dutchman expected to make the matchday squad. Nemanja Matic was neat in possession against the Magpies and his partnership with Fred could play a huge role in this match. Bruno Fernandes remains Manchester United’s biggest threat in attack but needs to find a way past Chelsea’s strong man marking.

Chelsea vs Manchester United Premier League 2020-21 match will be played on February 28 (Sunday) at Stamford Bridge. The game is scheduled to begin at 10:00 pm IST (Indian Standard Time).

Where to Get Live Telecast of Chelsea vs Manchester United, Premier League 2020-21 Football Match?

How to Get Free Live Streaming of Chelsea vs Manchester United, Premier League 2020-21 Football Match?

The game will also be available online for live streaming. As Star Network is the official broadcaster for Premier League in India, fans can watch the live streaming of Chelsea vs Manchester United match on Disney+Hotstar. JIO and Airtel subscribers can also watch the match live on JIO TV and Airtel XStream. Manchester United have not lost in their last 19 away games and the trend is likely to continue with a 1-1 draw with Chelsea this evening.

(The above story first appeared on LatestLY on Feb 28, 2021 12:37 PM IST. For more news and updates on politics, world, sports, entertainment and lifestyle, log on to our website latestly.com).