Antonio Conte's Tottenham Hotspur is a team in form, going past Leicester City with two stoppage-time strikes from Dutch forward Steven Bergwijn. Chelsea on the other hand, are heading into this clash on the back of a draw against Brighton. 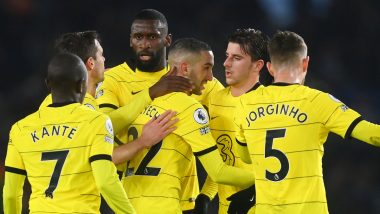 Chelsea have blown away their title ambitions with some below-par performances in the recent past. With no wins in their last four league matches, the Blues’ fortunes have changed drastically. They were top of the table at the start of the season and now it seems the likes of Manchester United and Tottenham Hotspur may close in on them should the slide continue. Thomas Tuchel is a man under duress and needs a way to change the fortunes of his team. Next up for them is Tottenham Hotspur in a massive London derby. Tottenham Hotspur have had their tails up after beating Leicester City through two stoppage times goals in the last match. Antonio Conte’s men are closing in on a top-four place and a win helps greatly. Chelsea versus Tottenham Hotspur will be telecasted on the Star Sports network and streamed on Hotstar from 10:00 PM IST. Southampton vs Manchester City Result and Goal Highlights: Defending Champions Settle for a Point at St. Mary’s Stadium

Andres Christensen has contracted coronavirus and is in isolation while Reece James and Ben Chilwell are long-term absentees. Trevoh Chalobah has resumed first-team training but will not be rushed into playing eleven. Romelu Lukaku has been woeful in front of  goal and the addition of Kai Havertz in attack may help the Belgian. Jorginho and N’Golo Kante should keep things stable in midfield and protect the backline.

Eric Dier returns to first-team training for Tottenham Hotspur after missing three weeks of action. Emerson Royal will undergo a late fitness test to determine his availability for the game while Heung Min-Son and Cristian Romero are ruled out. Steven Bregwjin was the star of the win against Leicester City but the Dutchman will have to be content with a place on the bench. Harry Kane and Lucas Moura should lead the attack in a counter-attacking 3-5-2 formation.

The Chelsea vs Tottenham Hotspur Premier League 2021-22 match will be played at Stamford Bridge in London. The football game will be held on January 23, 2021 (Sunday) and is scheduled to begin at 10:00 pm IST (Indian Standard Time).

Where to Get Live Telecast of Chelsea vs Tottenham Hotspur, Premier League 2021-22 Football Match?

Fans in India can watch the Chelsea vs Tottenham Hotspur match live on Star Sports channels since Star Network is the official broadcaster for the Premier League 2020-21 in India. Fans can tune into Star Sports Select SD/HD channels to watch live telecast the clash.

How to Get Free Live Streaming of Chelsea vs Tottenham Hotspur, Premier League 2021-22 Football Match?

Chelsea and Tottenham Hotspurs game is tough for both these teams and it is highly likely they might cancel each other out at the end of ninety minutes.

(The above story first appeared on LatestLY on Jan 23, 2022 02:56 PM IST. For more news and updates on politics, world, sports, entertainment and lifestyle, log on to our website latestly.com).