The Argentine goalkeeper replaced Messi as the hero for his side on the night as he saved three dramatic penalties to help his side qualify for the Copa America 2021 final against Brazil. 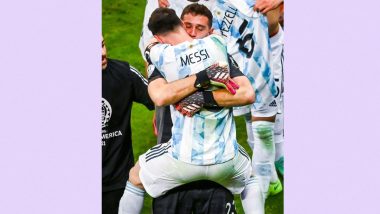 Argentina goalkeeper Emiliano Martinez has been called a 'phenomenon' by Lionel Messi after their dramatic win over Colombia in the semi-final of the Copa America on Wednesday. Martinez, who was playing his first major tournament for La Albiceleste pulled off three saves in the penalty shootout after the match was tied 1-1 at the end of extra-time. Argentina were ahead in the game from the beginning, with Messi assisting Lautaro Martinez for the opener in the seventh minute. Colombia fought back and scored the equaliser in the 61st minute through Luis Diaz. The game proceeded onto the penalties and Martinez held his own to ensure Argentina set up a final clash against arch-rivals Brazil on Saturday. "We have Emi, who is a phenomenon," said Messi, adding, "We trusted him. We achieved the goal of being able to play all the games and now we are going to the final." Lionel Messi Gives Colombian Defenders a Run for Their Money During Copa America 2021 Semi-Final, Argentina Captain’s Video Goes Viral

For one night, Martinez replaced Messi as the hero for his side. Coach Lionel Scloni also had words of praise for the Aston Villa goalie. He said, "We are very happy with Emiliano's performance, not only because of the penalties, but also because of the security that he is transmitting. The group of defenders is permanently supported and we like that."

Martinez's form and confidence would definitely be a huge boost for Argentina, as they head to the final clash against Brazil on Saturday. The historic rivalry would once again resume and this time, for South American supremacy.

(The above story first appeared on LatestLY on Jul 07, 2021 03:17 PM IST. For more news and updates on politics, world, sports, entertainment and lifestyle, log on to our website latestly.com).