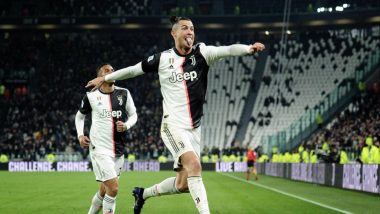 Cristiano Ronaldo might be in the twilight phase of his career, but the five-time Ballon d’Or is still creating goal-scoring records. The Portuguese star created yet another goal-scoring record during Juventus’ match against AS Roma on Sunday. The 35-year-old netted a brace to earn his team a cruciual draw in the Serie A 2020-21 clash, to become the first player to score 450 goals in Europe’s top five leagues. Cristiano Ronaldo Leaves Behind Lionel Messi to Make it to Top 10 List of Most Admired Men 2020 (Check Full List).

Cristiano reached achieved this extraordinary feat in just 554 matches, playing for the likes of Manchester United, Real Madrid and Juventus. A large number of those goals came while playing for the Los Blancos where the Portuguese star scored 311 goals in 292 matches. The five-time Ballon d’Or winner has also scored 84 goals for the Red Devils and 55 for the Bianconeri. UEFA Men's Player of the Year 2019-20: No Cristiano Ronaldo, Lionel Messi in Final Shortlist For First Time in 10 Years.

The Portuguese skipper’s goal-scoring record came at a very crucial time for Juventus as the record Italian champions were trailing 2-0 in the game against AS Roma until the 35-year-old rescued them by netting two goals, first of which came from the penalty spot while the second was a sensational header.

The former Real Madrid star also reached the milestone ahead of his longtime rival Lionel Messi, However, the Barcelona skipper is not far away as he has the tally of 445 goals in 486 games. The Argentine featured in the Catalan’s La Liga opener against Villarreal, scoring his first of the season from the penalty spot.

(The above story first appeared on LatestLY on Sep 28, 2020 02:58 PM IST. For more news and updates on politics, world, sports, entertainment and lifestyle, log on to our website latestly.com).