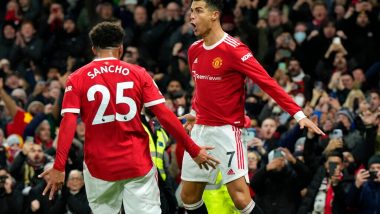 Cristiano Ronaldo is doubtful for the EPL 2021-22 clash against Aston Villa. The five-time Ballon d'Or award winner has picked up a thigh injury and might not feature in the upcoming game. The match will happen on January 15, 2022, at Villa Park. With this, Manchester United manager Ralf Rangnik is concerned about his injury. He was forced to miss out on the FA Cup 2021-22 match against Aston Villa. The Manchester United manager had said that there is nothing serious about CR7's injury. Cristiano Ronaldo Hints Manchester United Players Can't Accept Criticism, Says 'If You Don’t Want My Help, do Your Job’.

Ronaldo was asked if he will feature in the match against Aston Villa to which he said that he will try and train on Thursday and it depends on how his body reacts.  The Portugal star is quite hopeful that he will feature in the game."I will try to train as normal. Let's see how the body reacts. Fingers crossed. I'm confident," he had said.  All his fans will be keeping their fingers crossed and will surely want to watch him live in action. Ronaldo has had an oxygen chamber put into the home. The chamber helps him recover from muscle problems.

Cristiano Ronaldo has so far scored 14 goals from 21 appearances and surely has impressed the fans and football pundits after his homecoming. Manchester United is placed on number seven of the EPL 2021-22 points table with 31 points. The team has played 19 games so far and has won nine and lost six. Their remaining games ended with a draw.

(The above story first appeared on LatestLY on Jan 14, 2022 04:03 PM IST. For more news and updates on politics, world, sports, entertainment and lifestyle, log on to our website latestly.com).