For more than a week now, Cristiano Ronaldo has been in the news for allegedly raping a woman named Kathryn Mayorga while he was on a trip to Las Vegas. 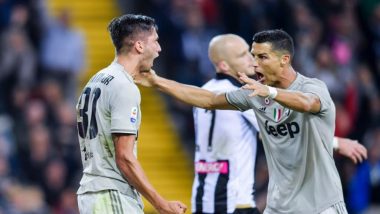 For more than a week now, Cristiano Ronaldo has been in the news for allegedly raping a woman named Kathryn Mayorga while he was on a trip to Las Vegas. Many thought that the footballer would not be in good shape on the field for the Serie A match between Juventus and Udinese yesterday post all the allegations. But CR7 had a brilliant outing at the Friuli Stadium as he scored a goal for his side and the Portugal star was blazing guns for Juventus. Cristiano Ronaldo Rape Allegation: Sponsors Nike, EA Sports Express Concern, Juventus Backs Portugal Forward.

It was Rodrigo Bentancur who scored a goal in the 33rd minute and then the former Real Madrid player fired another one just four minutes later. Just as Ronaldo scored the goal, the fans and his teammates cheered wildly for the side and the footballer. Juventus won the game by 2-0. Watch the video below:

However, after the game, the football star walked away quietly and giving a thumbs up to his fans who cheer for him, “Ronaldo Ronaldo.” This was CR7’s fourth goal for Juventus and with this win, they continue to dominate the Serie A table with 24 points in their kitty. Cristiano Ronaldo's Hotel Rape Case: Juventus Slammed For Their Tweets Backing the Portuguese Footballer!

Talking about Ronaldo's rape allegations, the star footballer has so far vehemently denied the same. It was during the live chat with his fans on Instagram last week he had said that the allegations and stories around his were false. He also took to Twitter and spoke about his innocence via a couple of posts. Sponsors like Nike have back the footballer and are deeply concerned about the allegations. Juventus too has lent its support for CR7. However, post allegations The Portugal football star has not found a place in the national team for a couple of games!

(The above story first appeared on LatestLY on Oct 07, 2018 04:33 PM IST. For more news and updates on politics, world, sports, entertainment and lifestyle, log on to our website latestly.com).