Ronaldo has seemed to unhappy with United's lack of activity in the transfer market and the forward, who wishes to compete for major titles and championships, is reported to have found the same spirit lacking at Manchester United. Under such circumstances, a switch could very much be on for him this summer. 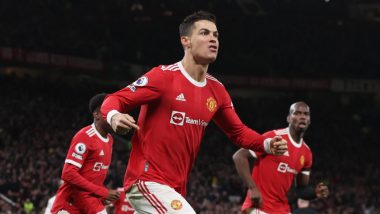 Bayern Munich have reportedly lined up Cristiano Ronaldo as a potential replacement for Robert Lewandowski, who seems to be making his way out of the club. Lewandowski has publicly stated that he does not intend to stay back at Bayern Munich and with his exit seeming inevitable, recent reports have claimed that the Bavarians have set their sights on signing Ronaldo from Manchester United. According to a report by AS, Ronaldo is very much in their plans should they end up seeing the back of Lewandowski. Cristiano Ronaldo Transfer News: Portugal Star Reportedly Contemplating Manchester United Exit Over Lack of Club’s Transfer Activity in Summer Window

The Poland striker has for long been linked with a move to Barcelona and his uncertain future at the club might have prompted to secure the signing of Sadio Mane from Liverpool. Now, with reports of Ronaldo being unhappy at Manchester United due to their inactivity in the transfer market, Bayern Munich has seemed to try and make the most out of this situation. Ronaldo wants the club to challenge for titles, a desire that has lacked in the club and with his final few years in football, one can expect the Portugal star to make the most out of the time he can offer on the pitch.

United's rivals Manchester City and Liverpool have signed top players like Erling Haaland and Darwin Nunez respectively. But United, despite being linked to several players like Lisandro Martinez, Anthony and also Frenkie de Jong, have not been able to pull off even one signing to date. Ronaldo joining Bayern Munich would greatly power their attack alongside Mane and the two can threaten other clubs and potentially help the German side in not only their domestic league but also in European competition.

(The above story first appeared on LatestLY on Jun 24, 2022 06:19 PM IST. For more news and updates on politics, world, sports, entertainment and lifestyle, log on to our website latestly.com).