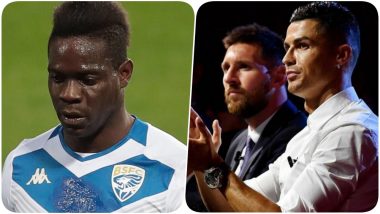 Mario Balotelli has attempted to settle the debate Cristiano Ronaldo and Lionel Messi and has picked up the Argentine captain over the Juventus star. Balotelli took to Instagram to share his thoughts to settle the debate between the two. The Italian player explained that Lionel Messi is out of the world, however, said that the two are the same statically. He also went on to say that even the defenders would want to play against Lionel Messi than Ronaldo. He also said that Messi should not be compared to the Juventus star. Lionel Messi and Cristiano Ronaldo have been compared for years together not only by fans but also the football pundits. But none of them can come to a conclusion on who between the two is better. Lionel Messi vs Cristiano Ronaldo: Fans Vote for Best Free-Kick Taker of All-Time.

"For the good of football, please don't compare him [Messi] to Juve's Number 7 (Ronaldo) again," he wrote on Instagram account.  Mario also said that one can never get better of Lionel Messi. During a conversation with one of the football sites, he said that he would pick Lionel Messi over Ronaldo especially because he has played with both of them. He also emphasised on Messi's performance in the Champions League 2018-19 against Liverpool where the six-time Ballon d'Or award winner had scored a couple of goals in the match.

"In terms of quality, Messi is better than everyone. I'm convinced that if you ask a defender if they would rather play against Messi or Ronaldo, they would have no doubts," he said during the interview. Balotelli looks to have a fall out with his current club Brescia.

(The above story first appeared on LatestLY on Aug 12, 2020 09:40 PM IST. For more news and updates on politics, world, sports, entertainment and lifestyle, log on to our website latestly.com).