Cristiano Ronaldo’s Arrival at Juventus in 2018 Led the Club To Lose Its DNA, Claims Gianluigi Buffon

Ronaldo was signed by Juventus in a bid to attain European glory but the Bianconeri failed to mount any serious challenge in the Champions League during the Portuguese' stay at the club. Juventus finished fourth last season and Ronaldo departed to rejoin Manchester United in the summer transfer window. 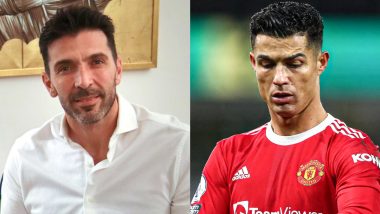 Gianluigi Buffon has said that Juventus lost its DNA as a club after Cristiano Ronaldo arrived in 2018. The Portuguese star joined the Turin and Serie A giants after enjoying a trophy-laden career at Real Madrid, in the hope of emulating a similar sort of success, especially in European football for Juventus. But unfortunately, Juventus did not even mount a serious challenge in the Champions League during Ronaldo's stay at the club, let alone winning the title.  Robert Lewandowski Reveals That Lionel Messi’s Speech After Winning Ballon d’Or 2021 Title ‘Really Touched' Him

In an interaction with TUDN.com, Buffon, who is a Juventus legend, said, "Juventus had the chance to win the Champions League the first year he arrived, which was the year I was at Paris Saint-Germain, and I couldn't figure out what happened. When I returned, I worked with CR7 for two years and we did well together, but I think Juventus lost that DNA of being a team. We reached the Champions League final in 2017 because we were a side full of experience, but above all we were a single unit and there was this competition for places within the group that was very strong. We lost that with Ronaldo."

Interestingly, Juventus' last Champions League final was in 2017, a year before Ronaldo signed for the club. The Portuguese star scored 101 goals for Juventus, did win two Serie A titles and one Italian cup during his stay in Turin.

He left for Manchester United this season after Juventus finished fourth on the points table. The Old Lady surely did feel the impact of his absence early on in the season but have managed to recover from that rocky start under the tutelage of coach Max Allegri.

(The above story first appeared on LatestLY on Dec 24, 2021 11:08 AM IST. For more news and updates on politics, world, sports, entertainment and lifestyle, log on to our website latestly.com).