Right after the Sergio Ramos’ Real Madrid lifted the Champions Trophy 2018 earlier in May 2018, Cristiano Ronaldo announced that his stint with the club will be short-lived. 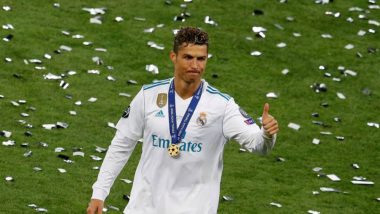 Right after Sergio Ramos’ Real Madrid lifted the Champions Trophy 2018 earlier in May 2018, Cristiano Ronaldo announced that his stint with the club will be short-lived.  Just after the win, there were rumours about CR7 joining Paris Saint Germain and Manchester United. However, for a few days now, there another set of speculations say that the Portugal football star will be joining Juventus. Amidst these speculations, Ronaldo’s manager Jorge Mendes dropped a major hint about further giving fuel to the rumours.

While speaking to a Portuguese newspaper Mendes said, “We will talk in the future. It's been really beautiful to play for Real Madrid. I'll give a response in the coming days. If Cristiano Ronaldo does leave Real Madrid, he will be eternally grateful to the club, the president, the whole team, the medical staff, the supporters and all the Madridistas around the world. It will only be for a new stage and a new challenge in his brilliant career.”

As per various reports, the 33-year-old Portuguese striker is close to signing the dotted line with Juventus and that he has already agreed to a four-year contract worth €30 million per season. Just after the rumours of Ronaldo’s transfer got thicker, the share prices of the club soared over the last three days by more than 20 per cent. As per a report by Times Live, “Shares in Juventus FC jumped almost 10 per cent on Thursday on the back of reports that Real Madrid striker Cristiano Ronaldo might soon join the Italian club.”

(The above story first appeared on LatestLY on Jul 06, 2018 10:31 AM IST. For more news and updates on politics, world, sports, entertainment and lifestyle, log on to our website latestly.com).