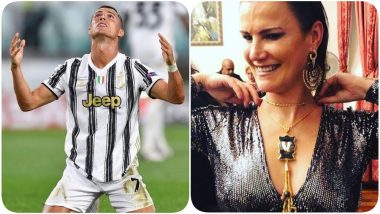 Cristiano Ronaldo’s team Juventus suffered from a heartbreaking exit from the Champions League 2019-20. Despite scoring a couple of goals in the match, the team lost to the French side Lyon. Post this his sister Elma took to social media and slammed the team for not giving their best collectively. She went on to say that Ronaldo did his best and played better than any other players. Alongside the post, Elma also posted a snap on her account where the five-time Ballon d'Or winner looked extremely dejected after the loss of Juventus on away goals. Cristiano Ronaldo Breaks His Silence After Champions League 2019-20 Exit, Promises to Come Back Stronger.

Elma took to social media and said that Ronaldo can;t function alone since football is a team sport. " And to see your dedication but unfortunately alone you cannot do everything moreover it is impossible!!!!!!  You know football is like that, but you also have to think you did your best and you're still the best," she wrote as the caption of the snap. Here's the post below:

This is not the first time that Ronaldo's sisters have slammed people. Prior to this Virgil van Dijk was slammed by Katia after the Liverpool striker took a jibe at the Portugal star during the Ballon d'Or award ceremony. He was asked about the absence of Ronaldo from the ceremony. Virgil van Dijk went on to say that he has one less competitor to bother about.

(The above story first appeared on LatestLY on Aug 09, 2020 12:15 PM IST. For more news and updates on politics, world, sports, entertainment and lifestyle, log on to our website latestly.com).