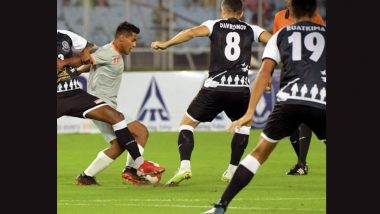 Kolkata, Aug 16: Kolkata giants Mohammedan Sporting began their 131st Durand Cup campaign with a thumping 3-1 win over defending champions FC Goa, in the tournament opener at Vivekananda Yuba Bharati Krirangan (VYBK), here on Tuesday. Muhammed Nemil opened the scoring for the FC Goa in the 34th minute of the first half with a wonder goal but the home team came back strong in the second half to first equalise through Pritam Singh (48') and then go ahead with six minutes of regulation time left through substitute Faslu Rahman. Durand Cup 2022: Mohammedan SC Secure 3-1 Comeback Win Over FC Goa in Tournament Opener.

Talisman Marcus Joseph put the icing on the cake with a third in the third minute of stoppage time for Mohammedan. Placed in Group A alongside Bengaluru FC, Jamshedpur FC and the Indian Air Force, both teams needed a win to ensure a probable top-two finish to qualify for the knockouts. Mohammedan coach Andrey Chernyshov will certainly return the happier of the two, seeing both his first eleven and bench performing with aplomb.

Deggie Cardozo, the Goa gaffer despite fielding a relatively inexperienced side opted for an attacking 4-3-3 formation to begin the game, while Mohammedan went the regulation 4-4-2 with Trinidadian Marcus upfront with the young Rahul Paswan. However, it was the Gaurs who drew first blood when just over the half-hour mark, Nemil found himself with some space just outside the box and completely wrong-footed the keeper Shankar Roy with a delectable chipped shot on the turn. The second half was all Mohammedan as Pritam Singh found a loose ball inside the box after the Goa custodian had parried away a Sk Faiaz cross. He made no mistake. Elon Musk Buying Manchester United? Netizens Splash Twitter With Memes After Tesla CEO Says He’s Purchasing Red Devils.

Mohammedan continued to attack and Marcus in particular missed a few gilt-edged opportunities. Then Chernyshov made an inspired double substitution bringing in Abhash Thapa and Faslu Rahman with just over 10 minutes of the game left. The two subs combined effectively as Man of the Match Faslu got at the end of an Abhash cross and Mohammedan were well on their way to avenge last year's final defeat. Then with the game in stoppage time, Marcus tapped in from close to make it 3-1 to the joy of the 30,000 odd local supporters in the stadium.

The game was preceded by an opening ceremony where West Bengal Chief Minister Mamata Banerjee was the Chief Guest. There were Army Bands on display and singers Papon and Rewben Mashangwa rendered the tournament theme song, before the Chief Guest was introduced to the players and support staff of both teams.

(The above story first appeared on LatestLY on Aug 17, 2022 09:20 AM IST. For more news and updates on politics, world, sports, entertainment and lifestyle, log on to our website latestly.com).