The Belgian star had just returned to first-team action after a lengthy lay-off in the 2-1 win over Elche during the weekend. The 30-year-old was in contention to make the matchday squad for the Champions League encounter but has missed the most recent training session and could be left out. 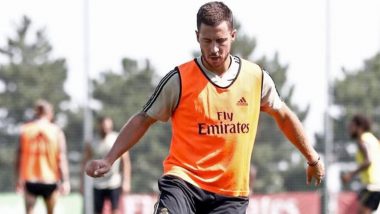 Eden Hazard continues to struggle with injuries at Real Madrid as the Belgian star is set to miss the Champions League clash against Atalanta after suffering a  muscle injury ahead of the European tie. Zinedine Zidane’s men have an advantage after a 1-0 win in Bergamo last month and have progressed from eight out of their last nine ties after winning the away leg. Real Madrid 2–1 Elche, Goal Video Highlights: Karim Benzema’s Brace Seals Comeback Win.

The Belgian star had just returned to first-team action after a lengthy lay-off in the 2-1 win over Elche during the weekend. After a 15-minute cameo, the 30-year-old was in contention to make the matchday squad for the Champions League encounter but now is likely to be excluded after suffering yet another injury which will keep him out for 4-6 weeks.

Zinedine Zidane recently stated that the club will remain patient with the Belgian due to his injury problems and won’t rush anything as it might result in a relapse. However, the club would have hoped to count on their star man in a crucial encounter as they look to avoid another early exit from Europe.

However, the record Spanish champions have received a boost in another area as captain Sergio Ramos returned from his injury against Elche and will be involved against Atalanta after completing the most recent training session with the squad.

Eden Hazard had started in four of Madrid’s six games prior to his injury – although in none of them has he completed the full 90 minutes – which was sustained at the start of February. Injuries have limited the Belgian from making the desired impact in the Spanish capital, scoring just three goals in his last 14 appearances.

(The above story first appeared on LatestLY on Mar 15, 2021 07:16 PM IST. For more news and updates on politics, world, sports, entertainment and lifestyle, log on to our website latestly.com).