Belgium defeated Portugal 1-0 on Monday to hand the defending champions a shock exit from the tournament. But injury concerns to both these star players might cost them a chance to attain European glory. 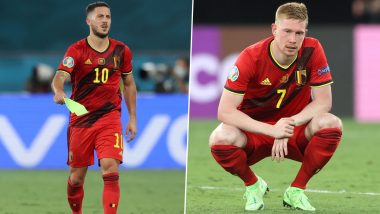 Belgium might be without two of their best players in Eden Hazard and Kevin De Bruyne for the crucial quarter-final match against Italy in Euro 2020. Belgium defeated Portugal 1-0 on Monday to hand the defending champions a shock exit from the tournament. But injury concerns to both these star players might cost them a chance to attain European glory. De Bruyne was the first of the two to get injured when Portugal midfielder Joao Palhinha tackled him behind to stop his run from the midfield. De Bruyne, badly hurt, was seen limping off the field in the 48th minute.  UEFA Euro 2020: Belgium Beat Portugal 1-0 to Reach Quarterfinals

The Manchester City midfielder had earlier missed the first match of the Euros due to a facial injury which he sustained during the Champions League final against Chelsea. He returned to score in his team's second match against Denmark and also had found a starting spot in their last match against Finland. Hazard on the other hand, played till the 87th minute before suffering from a muscle problem.

Hazard has had injury problems throughout the season for Real Madrid and this latest injury comes at a time when he was just about getting started on his journey to find some of his lost form once again. Roberto Martinez, the Belgium head coach said, "We will take 48 hours now to assess the situation of the two players. We go back to Belgium now and they will have scans on the injuries tomorrow."

Belgium have had a good run in Euro 2020 so far, winning all their group matches and defeating title favourites and champions Portugal in their last match. They would hope that both these players recover in time to be ready for the quarter-final against Italy on 3 July.

(The above story first appeared on LatestLY on Jun 28, 2021 01:55 PM IST. For more news and updates on politics, world, sports, entertainment and lifestyle, log on to our website latestly.com).