EVE vs LIV Head-to-Head Record: Ahead of 2019–20 EPL Merseyside Derby, Here Are Match Results of Everton vs Liverpool Last 5 Encounters 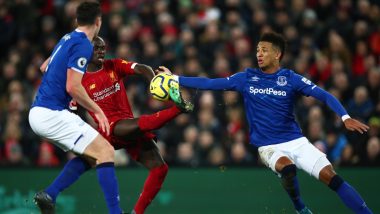 Liverpool will hope to take one more step closer to the Premier League title when they face Everton in the Merseyside derby on Saturday. Jurgen Klopp’s men are just six points away from clinching their first league title in 30 years and would do well to beat their Merseyside rivals, who haven’t won this clash in nearly a decade. Everton’s last win against Liverpool came in October 2010 at Goodison Park where both sides square-off yet again in their first match post the 2019-20 season restart. Tim Cahill and Mikel Arteta scored that day and since Everton have not seen daylight in the Merseyside derby. Everton vs Liverpool, EPL 2020: Check Out Predicted Line-Ups for EVE vs LIV at Goodison Park.

Klopp’s men already lead the Premier League points table and need six more to seal the Premiership while Everton are struggling in the 13th position with 37 points from 29 matches. Carlo Ancelotti’s men were thrashed 0-4 in their last match before the coronavirus pandemic and are winless in their last three league matches. Their opponents Liverpool have lost just once this season and have drawn another while winning 27 off their 29 matches. As Liverpool and Everton face each other in the Merseyside derby, take a look at the results of their last five meetings.

Both sides faced each other in the FA Cup third round. With their schedule heavy, Liverpool decided to field their B team in a Merseyside derby against Everton. But Curtis Jones’ 71st-minute striker from a Divock Origi assist was enough to secure Liverpool their 121st win in Merseyside derby.

It was a goal-fest at Anfield when both these teams last met in the Premier League. Liverpool needed just six minutes to go ahead through Divock Origi before Xherdan Origi made it 2-0 17 minutes later. But Michael Keane pulled one back for Everton with a header in the 21st minute. Just as half-time approached Sadio Mane scored a third for Liverpool but the game wasn’t over yet and just at the brink of half-time stoppage Richarlison made it 2-3 for Everton. Liverpool eventually had the final laugh with Georginio Wijnaldum netting the final goal in the 90th minute.

Liverpool and Everton played a goalless draw putting Klopp’s men behind in the Premier League race with Manchester City. The drab at Goodison Park left The Reds a point behind champions City in the league table which eventually played a big role in them losing the trophy to City.

The game seemed to be heading towards a draw before Origi sealed the winner after Everton goalkeeper Jordan Pickford failed to deal with a long ball from Virgil van Dijk in the final few seconds of the game. With the game seemingly heading towards a stalemate, Van Dijk tried his luck with an audacious volley from the edge of the penalty box. And although the ball was straight above him, Pickford failed to deal with it and Origi took great advantage of the melee to head the ball into the net and maintain Liverpool‘s unbeaten run in the league.

Liverpool and Everton have met each other multiple times across all competitions. Everton have won 82 times to Liverpool’s 121 wins while 83 matches have ended in draws.

(The above story first appeared on LatestLY on Jun 21, 2020 09:54 PM IST. For more news and updates on politics, world, sports, entertainment and lifestyle, log on to our website latestly.com).