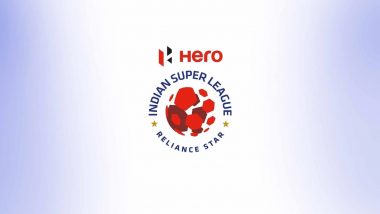 Kolkata, July 25: Despite query from one club about the possibility of holding the seventh edition of the Indian Super League (ISL) abroad keeping in mind the COVID-19 situation in the country, the organisers have said that they are confident of staging the top-tier football league at home. Goa or Kerala are set to host ISL this season with organisers, Football Sports Development Limited (FSDL), keen to conduct the competition in one state where a bio-secure bubble can be created to eradicate the threat of the coronavirus pandemic.

During a meeting of FSDL and all the clubs, one club official mooted the idea of taking the ISL abroad days after it was confirmed that the Indian Premier League (IPL) would be played in the UAE. ISL 2020–21 Transfer News: Former Jamshedpur Centre-Back Tiri Joins Champions ATK After Fallout With Kerala Blasters Over Pay Cut, Says Report.

"There was one club who floated the idea of holding ISL abroad. But organisers said they are very confident of hosting it in India with Goa and Kerala the frontrunners," a top source close to the development told IANS. It is expected that the decision on whether Goa or Kerala will host the tournament will be out by August 15.

Further, the source also said that either Goa or Kerala will become a world-class facility in terms of football infrastructure after it has hosted the ISL which is expected to start in the third week of November and end in March.

"At the moment Fatorda in Goa and Jawaharlal Nehru International Stadium in Kochi have all the facilities as they have hosted the U-17 World Cup in 2017. Stadiums like Tilak Maidan in Vasco and one in Bambolim will get a makeover and after it has hosted ISL, it will be ready to host international matches. Same for Manjeri Stadium and EMS Stadium in Kozhikode. Whichever state gets to host it, it will have a massive uplift in terms of football facilities," the source added.

The ISL this season will be played behind closed doors. In October, a virtual ISL workshop will be conducted and the clubs will be "presented with all the details, rules and regulations" regarding the event.

(The above story first appeared on LatestLY on Jul 25, 2020 07:37 PM IST. For more news and updates on politics, world, sports, entertainment and lifestyle, log on to our website latestly.com).