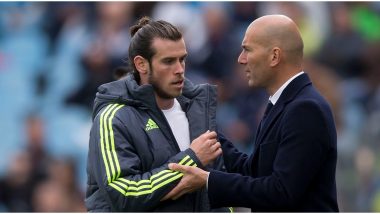 Gareth Bale’s Absence from Real Madrid’s final La Liga 2019-20 match against Leganes was a ‘technical decision’ said Madrid head coach Zinedine Zidane. Madrid, who had already clinched the league championship, were held to a 2-2 draw by Leganes who were relegated to the second division. Bale was an unused substitute in Madrid’s last six games and has appeared only twice in the 11 games that Madrid have played since the season resumption. Bale, who has been linked with a move away from Santiago Bernabeu after seven years at the club, was axed from the Madrid squad for their final La Liga game. Gareth Bale, Zinedine Zidane Engaged in Battle of Wills As Welshman’s Situation at Real Madrid Worsens Further.

Bale has been in the headlines in the last few weeks for his antics on the bench during matches and was merely joining the celebrations after Madrid clinched their record 34th La Liga title. The Welshman was seen standing with his arms folded when the players lifted coach Zidane in the air. All things suggest perhaps the 31-year-old’s time at the Spanish capital was finally coming to an end. Gareth Bale Left Out of Real Madrid Squad for Final La Liga 2019-20 Match Against Leganes.

It has been a similar story for his Colombian teammate James Rodriguez, who was left out of the last five match-day squads. Zidane had earlier said that Rodriguez had asked to be left out citing personal reasons after Madrid’s visit to Athletic Bilbao on July 5. He discussed both Bale and Rodriguez after the draw against Leganes but kept it short when asked on the pair’s absence from the squad.

"The situation changes all the time. You know what has happened with James, and Bale has been a technical decision, nothing more," Zidane, who guided Real to their first La Liga title since 2016-17, was quoted as saying by the BBC. Bale had only appeared only 16 times in the league this season and has only started 12 La Liga matches after his last summer move to China was called off midway through.

Luka Jovic, meanwhile, came off the bench against Leganes for what was his only second La Liga appearance after the coronavirus-enforced break. The Serbian, who joined Madrid from Eintracht Frankfurt last summer, has struggled for form and place in the Real Madrid team and has also been linked with a move away after scoring only twice in 26 appearances in his debut season at the Spanish capital.

"As always when I talk about Luka, what I say is that he is young," Zidane said taking about the talented 22-year-old. "He has talent, but it has been a difficult season for him, especially with injuries. Of course, things that have happened to him, I trust him. We will see next year."

Meanwhile, Madrid play their next match on August 7 with a trip to Manchester City in the second leg of their round of 16 Champions League clash against City. The newly crowned La Liga champions will be looking to overturn a 1-2 deficit at the Etihad.

(The above story first appeared on LatestLY on Jul 20, 2020 04:20 PM IST. For more news and updates on politics, world, sports, entertainment and lifestyle, log on to our website latestly.com).