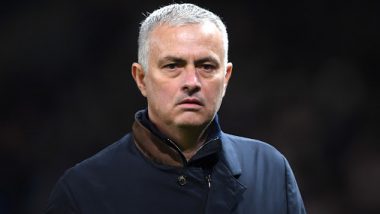 London, July 11: Tottenham Hotspur manager Jose Mourinho insists he can land trophies at the club despite going through a rough patch currently. Spurs are languishing at the ninth spot in the Premier League and are already out of the FA Cup and UEFA Champions League.

Mourinho took over at the club after Spurs sacked former manager Mauricio Pochettino mid-way through the season and the Portuguese trainer signed a three-year contract with the club.

Citing example of Liverpool manager Jurgen Klopp, Mourinho stated he is more than capable of winning trophies and just needs time for the club to buy into his philosophy entirely.

"How long it took for Jurgen [Klopp] and Liverpool?," Mourinho told reporters as per BBC Sport.

Spurs last won a trophy in 2008 when they won the League Cup under then-manager Juande Ramos at the expense of Chelsea. Since then, many managers have sat on the Spurs' hotseat but have failed to land a trophy.

(The above story first appeared on LatestLY on Jul 11, 2020 03:51 PM IST. For more news and updates on politics, world, sports, entertainment and lifestyle, log on to our website latestly.com).