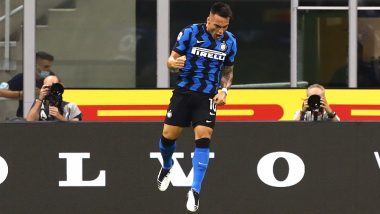 Rome, July 29: Inter Milan completed a double-kill against Napoli in Serie A as they dominated the Coppa Italia winners 2-0 at the San Siro.

Danilo D'Ambrosio put Inter ahead in the first half while Lautaro Martinez sealed the victory after coming off the bench on Tuesday evening, reports Xinhua news agency. Lautaro Martinez Transfer News Update: Inter Milan in Talks With Argentine Striker Over New Deal.

The away side had the most of the possession, but it was Inter that broke the deadlock in the 10th minute as Antonio Candreva's cross found Cristiano Biraghi, who pulled back for D'Ambrosio to finish with a low-strike.

The Nerazzurri doubled the lead in the 74th minute when Lautaro surged forward and released a missile that flew into the far corner.

Elsewhere, Atalanta continued their unbeaten run with a comeback 2-1 victory over Parma.

Inter remain at the second spot with 79 points, one ahead of Atalanta. The Dea will host Inter in the final round on Saturday which will be a head-to-head showdown for the runners-up spot for the season.

(The above story first appeared on LatestLY on Jul 29, 2020 10:04 AM IST. For more news and updates on politics, world, sports, entertainment and lifestyle, log on to our website latestly.com).