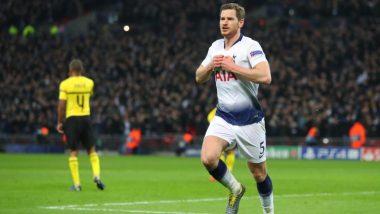 In an emotional message on Twitter, Jan Vertonghen has announced his departure from Tottenham Hotspur. The Belgium defender made over 300 appearances with the club in eight years. Jan’s contract was extended in June until the end of the current season and apparently has not been offered a new deal. “So my time at the club comes to an end. A sad day for many reasons. I will miss the friends I’ve made here, the staff that make the club run, playing at the amazing new stadium & of course you fans,” Jan tweeted. Golden Shoe 2019–20: Robert Lewandowski, Ciro Immobile, Cristiano Ronaldo and Other Top Goal Scorers in Top Five European Leagues.

“Thank you for all the support over the years. You’ve been amazing. We had many unbelievable memories but for now, it’s goodbye,” the 33-year-old wrote in another tweet.

Meanwhile, the club in a statement said: "We thank Jan for his tremendous service and wish him every success in the future. He will always be a valued member of the Spurs family.” Most Goals in EPL: Raheem Sterling Overtakes Cristiano Ronaldo on the List, Achieves Feat During Watford vs Manchester City.

Thank you for all the support over the years. You’ve been amazing. We had many unbelievable memories but for now, it’s goodbye. 💙#COYS pic.twitter.com/XrEjBaWb2C

Apart from Jan, goalkeeper Michel Vorm is also leaving the club following the end of his one-year contract. Vorm joined Tottenham in October as cover following an injury to Hugo Lloris. It was his second stint with the club.

(The above story first appeared on LatestLY on Jul 27, 2020 04:36 PM IST. For more news and updates on politics, world, sports, entertainment and lifestyle, log on to our website latestly.com).