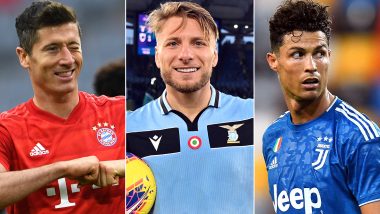 The race for the European Golden Shoe for 2019-20 season has been one of the best in recent years with neither Lionel Messi nor Cristiano Ronaldo have yet secured the prestigious award. The Barcelona captain has won the individual honour for a record six times and is followed by the Juventus star, who has won it four times. However, it looks like three would be a new winner this term. Most Goals in 2020: Cristiano Ronaldo Leads Scoring Chart; Lionel Messi Outside Top Three.

Lazio striker Ciro Immobile, who has struggled since football’s restart from coronavirus lockdown, has rediscovered his form, scoring four goals in last two games after finding the back of the net just twice in seven games prior to that. The 30-year-old’s hat-trick saw him move to the first position in the rankings and with two games left in the season, is the front runner to win the 2019-20 European Golden Boot. Most Goals in EPL: Raheem Sterling Overtakes Cristiano Ronaldo on the List, Achieves Feat During Watford vs Manchester City.

Ciro Immobile has been the top-scorer in Serie A on two previous occasions but has never won the Golden Show award. So with the domestic footballing season moving into its final stretch, here are the top-five goal-scorers across European leagues.

The Polish striker has been one of the best players in the world at the moment. His tally of 34 goals this season saw him finish as Bundesliga's top-scorer and currently is the leader in the race for the European Golden Shoe.

The 30-year-old is not the highest goal-scorer in Serie A this season and with two games still left of the Italian domestic season could very well with the prestigious honour for the first time in his career. He has scored six goals post lockdown, four of which have come in his last two games.

The Portuguese has shrugged off his first season syndrome and has been the main focal point fie Juventus this season. The 35-year-old lead the Bianconeri’s to yet another league title and has two games if he is to catch Ciro Immobile in the race for Europe’s top-scorer.

The German has had a breakthrough season this year which has earned him a move to Chelsea. He will not be available for RB Leipzig in their remaining Champions League campaign as the 24-year-old will soon start his training with the Blues.

The Argentine was unable to guide his side to third consecutive league title but has enjoyed a stellar individual season. He has scored 25 goals in La Liga this season and also has 22 assists to his name. Become the first player since Thierry Henry to reach double figures both in goals and assists in a single season.

(The above story first appeared on LatestLY on Jul 27, 2020 02:14 PM IST. For more news and updates on politics, world, sports, entertainment and lifestyle, log on to our website latestly.com).