The Japan vs Spain FIFA World Cup 2022 match will be played at the Khalifa International Stadium. The game will be held on December 01, 2022 (Thursday) and is scheduled to begin at 00:30 am IST (Indian Standard Time). 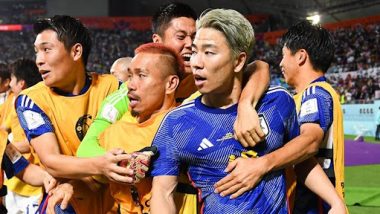 Japan blew a golden opportunity of knocking Germany out of the World Cup and enhanced their chance of making it to the next round when they lost to Costa Rica in their last game. Next up for them is Spain at Khalifa International Stadium where a win is needed by the Asian side to make it to the next round. Group E is delicately poised now with Spain on top with four points followed by Japan and Costa Rica with 3 points each. Spain will consider themselves unlucky not to win against Germany, a contest they dominated from start to finish. They already have a 7-0 win under their belt, achieved against Costa Rica and the confidence level of the squad is sky high. FIFA World Cup 2022 Group E Points Table Updated Live: Spain Consolidate Top Spot With 1–1 Draw Against Germany.

Takehiro Tomiyasu and Hiroki Sakai are struggling with hamstring issues and may miss out on the game for Japan. Maya Yoshida and Ko Itakura in the Japanese backline will have to be at their toes throughout the game with Spain boasting of a brilliant attack. Ao Tanaka and Hidemasa Morita in midfield may find it difficult to win back possession and it is imperative they keep their work rate high to counter Spain’s technical superiority.

Sergio Busquets is set to be rested for Spain and this will lead to Rodri starting as the central defensive midfielder. Gavi is injured creating an opening for Koke to partner Pedri as the attacking midfielder. Alvaro Morata led the attack for the 2010 champions with Dani Olmo and Ferran Torres on the wings. FIFA World Cup 2022 Schedule for Free PDF Download Online: Get Football Fixtures, Time Table With Match Timings in IST and Venue Details.

The Japan vs Spain FIFA World Cup 2022 match will be played at the Khalifa International Stadium. The game will be held on December 01, 2022 (Thursday) and is scheduled to begin at 00:30 am IST (Indian Standard Time).

Where to Get Live Telecast of Japan vs Spain, FIFA World Cup 2022 Match?

Sports 18 network holds the live broadcast rights of Football World Cup 2022 in India, So, fans in India can watch Japan vs Spain (JPN vs SPN), FIFA World Cup 2022 match live on Sports 18 in English commentary. For Hindi commentary fans will have to tune into MTV and Sports 18 Khel.

How to Get Free Live Streaming of Japan vs Spain, FIFA World Cup 2022 Match?

With Sports 18 holding the broadcast rights, the live streaming online of FIFA World Cup will be available on Jio Cinema mobile app and website. Fans can watch the live streaming of the Japan vs Spain (JPN vs SPN), FIFA World Cup 2022 match on Jio Cinema for absolutely free. Live commentary of the match is available in English, Hindi, Malayalam, Bengali and Tamil. Japan will try to hit Spain on the break but given the quality the Spanish side have, they should win this game comfortably.

(The above story first appeared on LatestLY on Dec 01, 2022 04:37 PM IST. For more news and updates on politics, world, sports, entertainment and lifestyle, log on to our website latestly.com).