The Argentine forward has been a crucial figure for PSG in their attack and it seems that he would leave the club, seven years after joining them in 2015. PSG won their 10th Ligue 1 title a few days ago. 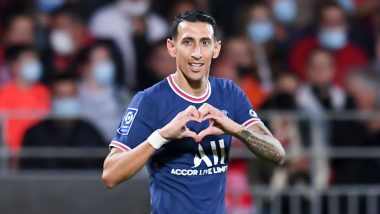 Angel Di Maria is reportedly on his way out of PSG with Juventus interested in signing the forward. The Argentine, who has been a crucial part of PSG for the past seven years, is most likely going to leave Paris on a free transfer with the club not interested in having him sign a new contract, according to Goal. com. Di Maria has quietly slipped in with impactful performances and turned up in crucial moments to clinch wins for his team but it looks that he would be taking up a new challenge next season if he ends up joining Juventus. Italy Captain Giorgio Chiellini To Retire From International Football After Finalissima Against Argentina

Di Maria has so far made 291 appearances for PSG and has scored 91 goals and 117 assists. He has been a crucial figure in PSG's attack and even continued to make an impact this season as well, helping the club win a 10th league title with a 1-1 draw against Lens. Should Di Maria head to Juventus, he can somewhat fill the void which would be left when fellow Argentine Paulo Dybala leaves the club after this season. Juventus have had a history of signing top players for free and Di Maria might just be the latest addition to that list. Juventus are keen on offering a one-year contract to the Argentine winger.

PSG, according to reports, are also set to relieve Mauricio Pochettino as head coach despite the Argentine leading them to the Ligue 1 2021-22 title. The French giants are considering bringing in Antonio Conte from Tottenham Hotspur.

(The above story first appeared on LatestLY on Apr 26, 2022 08:56 PM IST. For more news and updates on politics, world, sports, entertainment and lifestyle, log on to our website latestly.com).