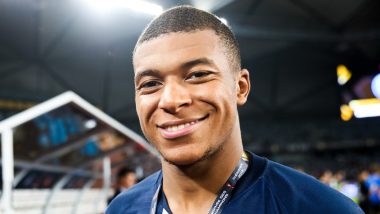 Kylian Mbappe has returned on the covers of the EA Sports FIFA 2022 game. The official account of EA Sports confirmed the news on their social media accounts. Even last year, Mbappe was spotted on the covers of the FIFA 2022. He had replaced Eden Hazard on the covers and this is obviously the second year that he will be spotted on the page. Kylian Mbappe was last seen in action for the Euro 2020 as he played for France in the European Championship. His team had been ousted from the Round-of -16 itself. Kylian Mbappe Reacts After Missing Out on Penalty During France vs Switzerland, Euro 2020 (Watch Video).

France had been placed in Group F alongside Germany, Portugal and Italy. Kylian Mbappe could not help his team well and they were shown the door before the quarter-finals itself. The PSG forward is looking to quit the French Club for now. It is very likely that he would make a move to Reak Madrid as they have been eyeing the 20-year old for a long time now. Now, let's have a look at the tweet posted by EA Sports below.

Honoured to welcome back @KMbappe

Kylian Mbappe has been one of the most sought players and is often labelled as the torchbearer of the greats like Cristiano Ronaldo and Lionel Messi. It would be interesting to see who makes it to the final XI of FIFA 2022.

(The above story first appeared on LatestLY on Jul 09, 2021 09:53 PM IST. For more news and updates on politics, world, sports, entertainment and lifestyle, log on to our website latestly.com).