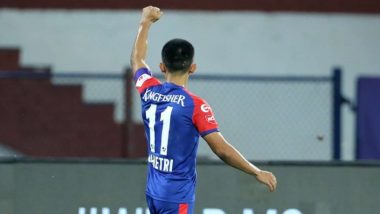 Not very long ago did they post Lionel Messi's picture with a caption from Shah Rukh Khan's movie 'Don'. The snap was caption with the words, “Leo Ko Pakadna Mushkil he nahi na mumkin hai. I am Leo." Even then, the fans couldn't contain their excitement and reacted on the post in the Comments section. For now, have a look at the post for the Indian captain.

The La Liga for a while now has been catering to the fans in India and as well know Hitman Rohit Sharma is the brand ambassador of the Spanish League. Prior to this, the official page of La Liga had called out to Real Madrid's Eden Hazard and captioned the snap with a song from 'Gully Boy' titled 'Apna Time Ayega'. Talking about Chhetri, even Indian cricket captain Virat Kohli wished on Twitter and Anushka Sharma also joined the bandwagon.

(The above story first appeared on LatestLY on Aug 04, 2020 01:24 PM IST. For more news and updates on politics, world, sports, entertainment and lifestyle, log on to our website latestly.com).