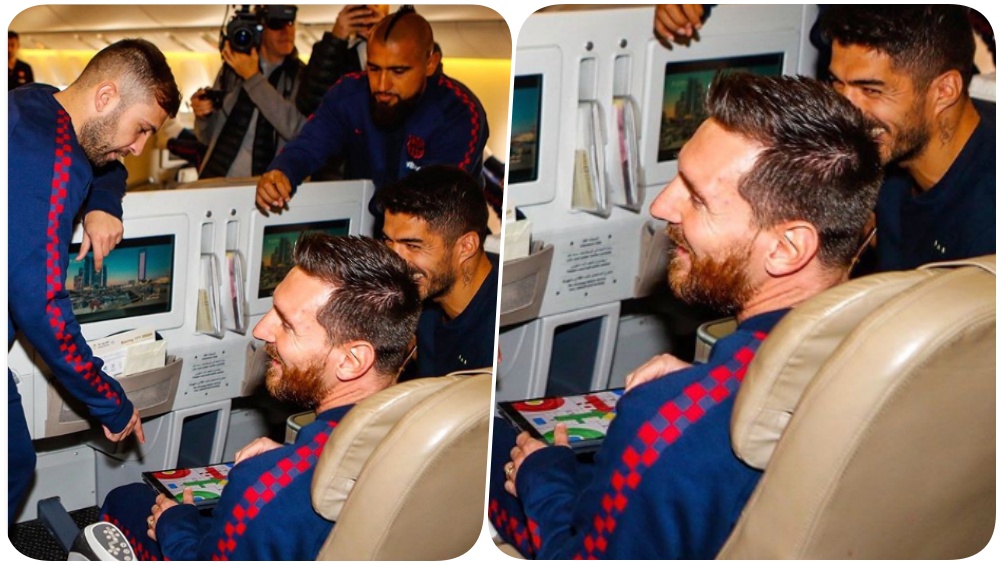 Lionel Messi and his team will play in the semi-finals of the Supercopa De Espana 2019-20 in Jeddah at the King Abdullah Sports City. Ahead of the match, Lionel Messi was spotted playing the game of Parcheesi on his IPad along with his Barcelona teammates Luiz Suárez, Arturo Vidal and Jordi Alba. The six-time Ballon d’Or winner was snapped while playing Parcheesi along with his teammates while they were on their way to Saudi Arabia. The picture of the same was shared on social media by one of the fan pages. FC Barcelona vs Atletico Madrid Head-to-Head Record: Ahead of Supercopa de Espana 2019–20 Clash, Here Are Match Results of Last 5 Encounters.

Ahead of the game, the players of the team were seen sweating it out in the nets. Lionel Messi, Antonie Greizmann and others were seen putting their best foot forward ahead of the game. All eye will be on Lionel Messi and Antonie Griezmann as the Catalan Giants have a few of their good players missing out on the contest due to some reason or the other.

Next Stop: Saudi Arabia — but not before a game of parcheesi 🤪

Talking about the game, both Barcelona and Atletico Madrid have injury concerns. With the Catalan Giants will miss out on the services of their first choice goal-keeper Marc-Andre ter Stegen due to an injury on his right knee. Ousmane Dembele and Arthur continue to remain absent from the squad due to an injury. Frenkie de Jong is suspended after being sent off for two bookable offences during the match against Espanyol. Atletico captain Koke could also sit on the bench due to his thigh problems. He had been ruled out from a couple of games.