The Argentina star has been in good form in Copa America, netting three goals and making two assists in four matches so far. 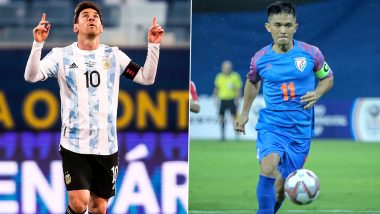 Argentine star Lionel Messi on Monday, surpassed India's Sunil Chhetri with a brace and an assist against Bolivia in a Group A match. The 34-year old, who has had a fine tournament so far, helped Argentina trump Bolivia 4-1 and top their group with 10 points, heading into the knockouts. Argentina would next take on Ecuador in the knock-out stage on July 4, Sunday. Messi's brace against Bolivia helped him get past Chhetri, who has scored 74 goals in international football. Messi now has 75 goals to his name as he also is the highest scorer in the Copa America this season, with him finding the net three times and providing two assists. Ballon d'Or Trends on Social Media After Lionel Messi Scores a Brace During Bolivia vs Argentina, Copa America 2021

Surprisingly, he is yet to win any major international tournament with the Argentina senior team and with the form he is currently in, there might just be change in his fortunes this time. Portuguese ace Cristiano Ronaldo, who is also Messi's competitor, recently equalled Iranian legend Ali Daei's international goalscoring tally of 109 goals. Despite Portugal being knocked out of the Euros, Ronaldo is the top-scorer of this edition of the tournament.

(The above story first appeared on LatestLY on Jun 29, 2021 07:01 PM IST. For more news and updates on politics, world, sports, entertainment and lifestyle, log on to our website latestly.com).