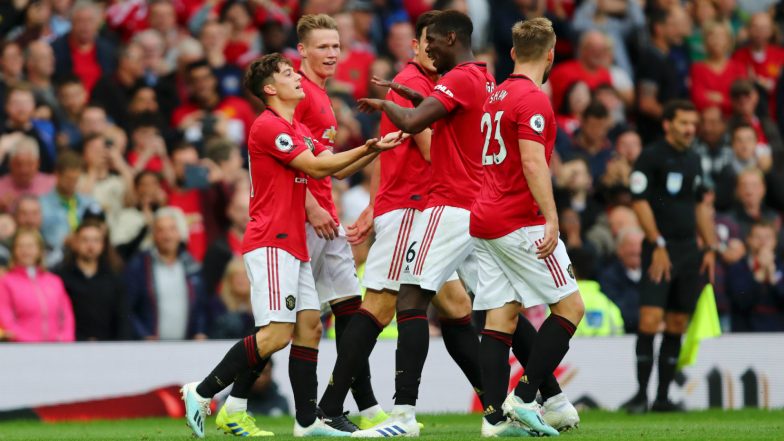 Manchester United vs Crystal Palace, Premier League 2019–20 Free Live Streaming Online and Live Telecast: It has been an exciting start for Manchester United in the 2019/20 season with a win over against Chelsea and an important point against Wolves away, a team they lost twice to the last term. Although the manner of the draw must be hurting the Red Devils with Paul Pogba fluffing his lines from the penalty spot in pursuit of the winner. Ole Gunnar Solskjaer knows he has a run of winnable games coming up starting Crystal Palace at Old Trafford. A win takes them to the top of the league though that may change post the game between Arsenal and Liverpool.

Luke Shaw has drawn flak for his two performances so far and fans want the full-back to raise his game on the level of Aaron Wan Bissaka, who comes against his boyhood club. Harry Maguire and Victor Lindelof are the front choice partnership for Manchester United as they look to stamp their authority on the league. Daniel James had a poor game against Wolves and may drop to the bench with either Juan Mata or Jesse Lingard filling in for the youngster. Nemanja Matic has not yet featured for the Red Devils with Scott McTominay a regular alongside Paul Pogba. The Serbian will be hoping to get a few minutes under his belt against Palace.

Roy Hodgson travels to Manchester without two of his regular starters in James Tomkins and Mamadou Sakho. Gary Cahill looks set to be given his start in a Crystal Palace shirt after arriving on a free transfer. Wilfred Zaha and Christian Benteke have quality in them and will test United’s backline. James McArthur in the sweeper role will need to cut off United’s quick transitions from defence to attack.

You can watch Manchester United vs Crystal Palace on Hotstar. They provide live streaming of all English Premier League 2019-20 season football matches.

Crystal Palace will be aware of the fact that Manchester United do not like playing against teams that sit back and absorb pressure. If they can frustrate United and keep the home fans quite, they can come away with a positive result.