Marcus Rashford Sorry for Missed Penalty During Euro 2020 Finals, But Says 'I will Never Apologise for Who I Am' 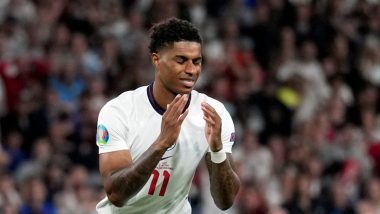 Marcus Rashford had been in the news for getting hurled with racist comments at the Wembley Stadium on Sunday after he missed a penalty during Euro 2020 finals between England and Italy. The fans were heard hurling racist comments on Jadon Sancho, Bukayo Saka and Marcus Rashford for missed penalties. Post this, Rashford took to social media and posted a tweet where he has apologised to the fans for the missed spot-kick but also said in a long note posted alongside his picture, "will never apologise for who I am." Marcus Rashford's Mural Vandalised on Streets of Manchester After Missing Penalty in Euro 2020 Final Against Italy.

He also posted a few hand-written notes by children where they are lauding his effort and asking him to chin up. Rashford's mural was defaced after England's Euro 2020 defeat. However, a few fans posted positive messages on the same and this obviously please the Manchester United star. A part of his social media explained about how terrible he felt when he missed the penalty kick. "I felt as though I let my team mates down. I felt as if I'd let everyone down," read a part of the note shared by Manchester United forward. Now let's check his social media post below:

Just after the players were insulted with racist chants by the fans, the England FA issued a statement about the same and condemned their acts. The racist abuse has prompted a police investigation.

(The above story first appeared on LatestLY on Jul 13, 2021 01:07 PM IST. For more news and updates on politics, world, sports, entertainment and lifestyle, log on to our website latestly.com).