The young England striker was accused of sexual abuse and physical assault by girlfriend Harriet Robson, who shared harrowing pictures, audio clips and a video about the same. Greenwood was later reported to be arrested on suspicion of rape and assault by Greater Manchester Police. 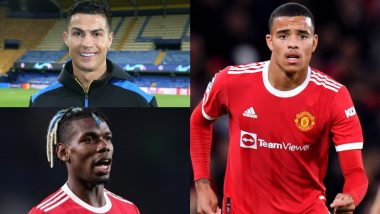 Reports of Mason Greenwood's alleged domestic violence on girlfriend Harriet Robson has come as a shock to many in the football fraternity, including his Manchester United teammates. According to reports, some of Greenwood's high-profile Manchester United teammates, the likes of which include Cristiano Ronaldo have unfollowed the young Englishman on Instagram. A day ago, Greenwood's girlfriend Robson shared pictures, videos and also audio clips, revealing disturbing details about the striker's alleged abuse of her. After they went viral on social media, Greenwood was expectedly at the receiving end of a lot of criticism. Mason Greenwood’s GF Harriet Robson’s Dad Releases Statement Over Domestic Violence Allegations, Draw Ire From Netizens

According to a report in the Daily Mail, Ronaldo, along with goalkeeper David de Gea, Marcus Rashford and also World Cup-winning midfielder Paul Pogba have unfollowed Greenwood on Instagram. The list also includes Edinson Cavani, Jesse Lingard and Scott McTominay. In contrast, Bruno Fernandes and captain Harry Maguire remain among those who still reportedly follow him on Instagram.

Greenwood was barred by Manchester United from taking part in training or playing any match until further notice. It can thus be concluded that he would not be seen on the football pitch for some time to come. The striker was also arrested on Sunday after these allegations and horrifying pictures surfaced on social media. A spokesman of the Greater Manchester police was quoted saying, "Greater Manchester Police was made aware earlier today (Sunday 30 January) of online social media images and videos posted by a woman reporting incidents of physical violence. An investigation was launched and following enquiries, we can confirm a man in his 20s has since been arrested on suspicion of rape and assault. He remains in custody for questioning. Inquiries are ongoing."

(The above story first appeared on LatestLY on Jan 31, 2022 10:35 PM IST. For more news and updates on politics, world, sports, entertainment and lifestyle, log on to our website latestly.com).