Allegri was a top managerial target for Los Blancos after the departure of Zinedine Zidane. However, Juventus signed the Italian back and Real Madrid brought back Carlo Ancelotti to the club. 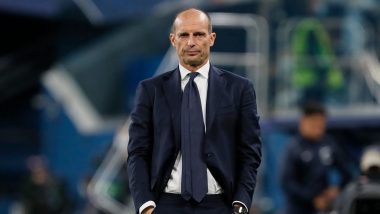 Juventus head coach Massimiliano Allegri revealed that he had originally signed for Real Madrid last summer before returning to his former club. Real Madrid had lost the La Liga title race to rivals Atletico Madrid and Zinedine Zidane had left the Los Blancos as the season ended. Speaking to GQ, he said, "I had already signed as new Real Madrid manager last summer. It was done and sealed." Cristiano Ronaldo Ecstatic After Portugal Qualifying for FIFA World Cup 2022, Writes, ‘We Want More’ (See Post)

Opening up on the U-turn he made, Allegri claimed that he called up the Real Madrid president and turned down the offer to move to Spain. "Then Juventus contacted me… so I called Florentino Perez in the morning and I told him: 'I’m sorry, I’m not coming. I’m joining Juventus," he added. Before joining Juventus in 2021, Allegri had earlier won a total of 11 trophies in five seasons before leaving the club in 2019.

Allegri's return to Juve did not go as he had expected initially with the Bianconeri languishing in the relegation zone at one point of time following a very rocky start after talismanic forward Cristiano Ronaldo left to rejoin Manchester United. But the Old Lady have recovered since then and are currently fourth on the Serie A points table. They have been knocked out of the Champions League by Villarreal but still have a chance to qualify for the tournament next season. Real Madrid meanwhile, face Chelsea in the quarterfinals and are on their way to a La Liga title win if things don't change from here on.

(The above story first appeared on LatestLY on Mar 31, 2022 08:52 PM IST. For more news and updates on politics, world, sports, entertainment and lifestyle, log on to our website latestly.com).