The iconic Melbourne Cricket Ground (MCG) will host one of the biggest football clashes when Brazil and Argentina play a friendly in June in preparation of the FIFA World Cup in Qatar later this year. 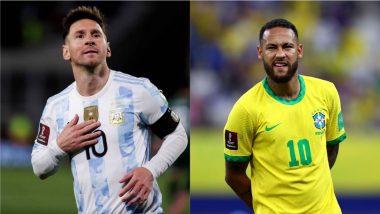 Melbourne, April 20: The iconic Melbourne Cricket Ground (MCG) will host one of the biggest football clashes when Brazil and Argentina play a friendly in June in preparation of the FIFA World Cup in Qatar later this year. Brazil and Argentina will be returning to the MCG, having last faced off at the venue in 2017 when Lionel Messi's Argentina had defeated their South American rivals 1-0 in front of 95,569 fans. A statement on the MCG's homepage said on Wednesday that, "Football fans in Melbourne and across Australia will witness the astonishing skills of football giants, Brazil and Argentina live when the two teams face off for Superclasico 2022 at the MCG on June 11." Premier League: Liverpool Dismantle Manchester United with 4-0 Win.

Recollecting the 2017 clash between the two footballing giants, MCG said, that fans were then treated to the likes of Philippe Coutinho, Paulo Dybala and Gabriel Jesus across the two South American powerhouses, as the MCG recorded its largest crowd for a football match, eclipsing the Liverpool FC and Melbourne Victory friendly back in 2013. Superclasico was created in 2011 as a two-game series between both nations but was altered in 2014 to a one-off match at a neutral venue with previous matches played in front of record crowds. International matches played in a World Cup year are vital to the preparation of qualifying teams, and Superclasico organisers are expecting both Brazil (1st in the FIFA world rankings) and Argentina (4th in the FIFA world rankings) to field their strongest available teams. La Liga: Real Madrid Can Take Another Step Towards Title in Visit to Osasuna.

"To have two of the most successful football teams in the world return to the MCG to continue their longstanding rivalry reinforces our position as one of the world's great sporting cities and Australia's event capital," Minister for Tourism, Sport and Major Events, Martin Pakula, said on Wednesday. "We are delighted to welcome two footballing giants back to the MCG to dazzle Melbourne and Australian football and general sports fans, and in a World Cup year no less," said Melbourne Cricket Club chief executive, Stuart Fox.

(The above story first appeared on LatestLY on Apr 20, 2022 03:06 PM IST. For more news and updates on politics, world, sports, entertainment and lifestyle, log on to our website latestly.com).