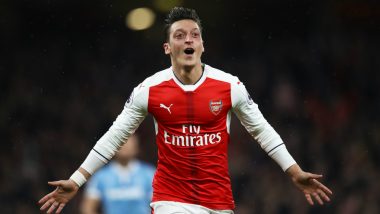 Mesut Ozil has been on the outskirts of the Arsenal squad in recent years and has hardly played competitive action post the coronavirus enforced lockdown. The Gunners fans are also not impressed with the form and the work rate shown by the German midfielder on the field. However, the 31-year-old looks to have somewhat won over the North London club faithful after trolling rivals Tottenham Hotspur on social media. Mesut Ozil and Wife Amine Gulse Welcome Baby Daughter, Arsenal Star Thanks Almighty for Keeping Their Child Healthy (View Pic).

The Arsenal player recently hosted a Q & A session on his official Twitter account and when asked if he would either play for cross-town rivals Tottenham Hotspur of retire, the German midfielder had a savage reply. ‘If I don’t want to win a cup, I should go there’ said the 31-year-old midfielder while replying to the question.

This response certainly put Mesut Ozil back in the good books of Arsenal fans as the Gooners started hailing the playmaker. Poor performances have seen the German lose his starting spot in the team but with Arsenal fans once again on the side of their ‘once adored’ star, he might get a chance to prove himself in the upcoming season.

Winning hearts, off the pitch! https://t.co/PyT2dfKYO6

Tottenham Hotspur, in recent years, have established as a top team in England but have failed to win a silverware. Spurs came close two seasons ago but were defeated in the Champions League final by Premier League side Liverpool. The Lilywhites last won a trophy in 2008, when they lifted the League Cup.

Mesut Ozil recently took part in friendly for Arsenal, which suggests that he may be included in the squad which faces Fulham in the Gunners’ opening game of the season. Speaking of his current situation the German said, ‘I’m fit & ready and doing my best. Unfortunately, it’s not in my hands to decide about the squad on the weekend. We will see!’

(The above story first appeared on LatestLY on Sep 09, 2020 10:32 PM IST. For more news and updates on politics, world, sports, entertainment and lifestyle, log on to our website latestly.com).