Mohamed Salah vs Cristiano Ronaldo in EPL: Egyptian Footballer's Stats at Liverpool Are Better Than CR7's at Manchester United 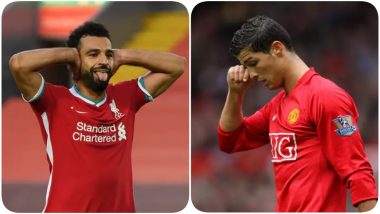 Over the years Mohamed Salah has emerged as one of the best layers of Liverpool FC. The Egyptian King has scored during vital game and thus has won many matches for the side. With this, Mohamed Salah has already surpassed Cristiano Ronaldo when the five-time Ballon d’Or winner was at the Manchester United.  At least the stats say so. Mohamed Salah had scored 32 goals with 10 assists in EPL 2017-18. The Egyptian further scored 22 goals with eight assists during EPL 2018-19. In the last season of the English Premier League, he had netted 19 goals with 10 assists. With this, he had scored 73 goals and 28 assists. Whereas, Ronaldo, had scored 17 goals and eight assists during EPL 2006-07. Mohamed Salah’s Hat-Trick Powers Liverpool to Seal 4-3 Win Over Leeds United During EPL 2020-21, Check Goal Highlights.

CR7 further netted 31 goals and six assists during EPL 2007-08. During EPL 2008-09, he scored 18 goals and nine assists. Thus the Portugal star scored 66 goals and 20 assists during his stint with Manchester United. Thus it is obvious that Egyptian King has outscored Ronaldo. Salah joined team Liverpool in 2017 and has been consistent ever since then. The Liverpool forward has scored 97 goals in 154 games in all competitions. Gary Neville also praised Salah for his prolific performance.

"Four years ago, when he first came to Liverpool and he got those 40-odd goals, I thought, 'That's a freak. He won't be able to live with that. But then he consistently produces over a period of two or three years," said the English coach during an interview. Salah started off his Liverpool 2020-21 EPL campaign with a bang by scoring a hat-trick against Leeds United. The Reds won the game 4-3.

(The above story first appeared on LatestLY on Sep 17, 2020 08:01 PM IST. For more news and updates on politics, world, sports, entertainment and lifestyle, log on to our website latestly.com).