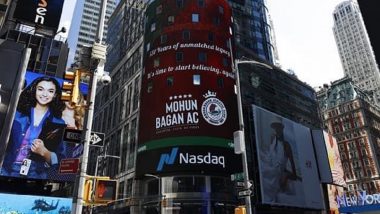 Kolkata, July 29: Iconic Indian football club Mohun Bagan went global on Wednesday as it became the country's first ever sports entity to feature on NASDAQ billboards in New York's Times Square. This happened on Mohun Bagan Day, celebrated every year on July 29 to commemorate the team's famous IFA Shield triumph in 1911 when it defeated East Yorkshire Regiment 2-1 to become the first Indian club to end the British stranglehold on the tournament.

Founded in 1889, the 131-year-old city-based club has no dearth of supporters across the world but the American stock exchange paying it tribute by displaying its logo and colours on its billboard holds special significance. Mohun Bagan FC Not to Conduct Traditional ‘Bar Puja’ on First Day of Bengali New Year Amid COVID-19 Outbreak.

The pictures from NASDAQ is a testimony to the fact that Mohun Bagan belongs to a different league. Huge day for all the Mariners!!

"It is a matter of great pride for all Mohun Bagan fans and supporters. It shows the kind of stature the club enjoys. No Indian sports club has ever featured on something like this, so it is significant, very different," Mohun Bagan's top official Debashis Dutta told PTI.

The 1911 triumph was seen as a huge moment in India's freedom struggle at the time, giving hope to the people that the British could be defeated. It was India's victory and not just the 11 barefooted natives that turned to face their well-oiled opponents.

"Happy #MohunBaganDay2020 to one of the most passionately-supported clubs on the planet." The club had earlier tweeted, "The pictures from NASDAQ is a testimony to the fact that Mohun Bagan belongs to a different league. Huge day for all the Mariners!! Happy Mohun Bagan Day Mariners !! #JoyMohunBagan #MohunBaganDay2020."

It's die-hard fans took to social media to express their delight. Mohun Bagan won the National Football League three times and the I-League twice, including in 2020. They had managed to clinch the title just before the league was suspended due to the coronavirus outbreak.

Earlier this year, the club announced a merger with the Indian Super League (ISL) club ATK, and will be rechristened as ATK-Mohun Bagan. The club will be part of the next season of the ISL, which will be held behind closed doors from November this year to next March.

On Wednesday evening, hockey stalwart Ashok Kumar, a key member of India's 1975 World Cup-winning team, will be conferred the Lifetime Achievement Award, while Gurbux Singh and Palash Nandi will be given the club's highest honour, the Mohun Bagan Ratna.