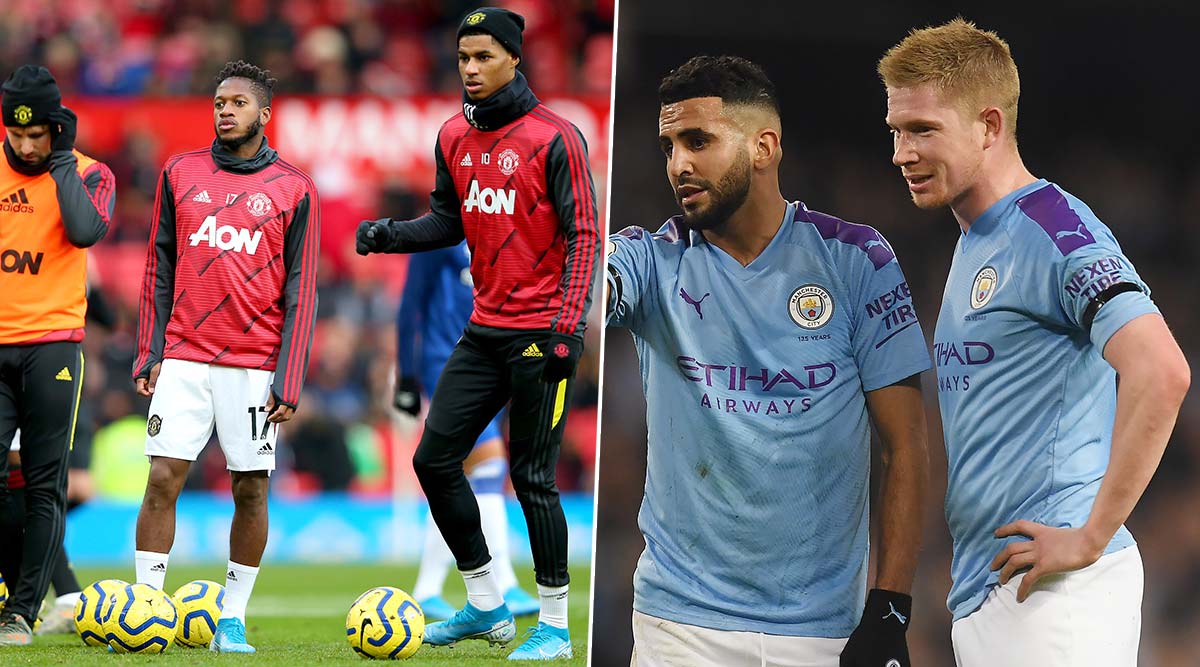 Manchester United and Manchester City will close in on this season’s first trophy when they face each other in a city derby in the 1st semi-final leg of the 2019-20 EFL Cup. Manchester United vs City derby clash will be played at Old Trafford on January 08, 2019 (Wednesday) with both teams making their semi-final appearance across all competitions in the ongoing season. Fans, who play fantasy games like Dream11, can find all team details, including player availability and form, to build a strong fantasy playing XI for the MUN vs MCI Carabao Cup clash. A Spirited United beat City 2-1 when they met earlier this season and Ole Gunnar Solskjaer’s men will hope to do the same at Old Trafford. Pep Guardiola has won all of his last 5 domestic semi-final matches with City. Meanwhile, for Drem11 tips and team suggestions to build a strong fantasy XI, please scroll down. Manchester United vs Manchester City Head-to-Head Records: Ahead of EFL Cup 2019-20 Clash, Here’re Match Results of Last 5 Manchester Derbies.

The United early 2019 December – which beat Tottenham Hotspur and Man City in the same week – however, have failed to last long with Solsskjaer’s men now pegged back by injuries and mediocre form. The five-time EFL League Cup winners have already lost midfield duo Paul Pogba and Scott McTominay to long-term injuries, while Harry Maguire (muscle pull), Anthony Martial and Jesse Lingard (both illness) are major doubts for the derby encounter. Diego Dalot, and Timothy Fosu-Mensah and Axel Tuanzebe have returned from injuries, while Eric Bailey, who is out of contract in the summer, is on recovery. Man United vs Man City, Carabao Cup 2019–20: From Marcus Rashford to Sergio Aguero, 5 Players to Watch Out.

Goalkeeper Ederson is expected to return in the net for City for this important clash, while John Stones is expected to partner Fernandinho at the heart of the defending champions’ defence against their city rivals. Nicolas Otamendi is also available for the two-time running champions even as they miss Leroy Sane and Aymeric Laporte.

Manchester United vs Manchester City, EFL Cup 2019, Dream11 Team Prediction: Defenders – Fernandinho (MCI), Harry Maguire (MUN) and Aaron Wan-Bissaka (MUN) should be picked as the three defenders. All three are excellent defenders, while Maguire and Fernandinho can provide the scoring threat and Wan-Bissaka has an assist to his name.

Manchester United vs Manchester City, EFL Cup 2019, Dream11 Team Prediction: Forwards – Marcus Rashford (MUN) has just been voted the EPL Player of the Month and should the first attacking choice in every fantasy team. Raheem Sterling (MCI) and Sergio Aguero (MCI) are too good to be left out although Mason Greenwood (MUN) can also be a temptation.

Man City have won six of their last nine matches against United scoring 10 times to United’s 7 goals in those matches. Guardiola’s side is also unbeaten in their last 15 Carabao Cup matches spanning three years. Incidentally, their last defeat in the EFL League Cup came against United in 2016 before the winning run.