The winger underperformed last season for PSG and is reportedly keen on an exit from the club. Manchester United, Chelsea and Newcastle United have been linked with the Brazilian as his potential future destinations. 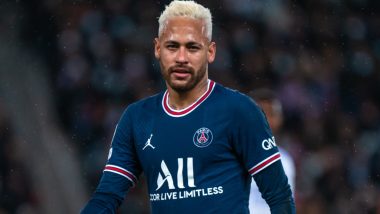 Neymar is reportedly considering an exit from PSG. The Brazilian is eager on leaving the club this summer transfer window after an interview of club president Nasser Al-Khelaifi regarding his departure. Al Khelaifi, while speaking to Le Parisien, had reportedly said this asked about Neymar's possible departure from PSG, "A possible departure of Neymar this summer? What I can tell you is that we expect all the players to do much more than last season." Raheem Sterling Transfer News: Chelsea Prepare New Proposal For Manchester City Winger

The Brazilian winger did not produce his best last season, scoring 12 times in 28 appearances for the club. He along with new signing Lionel Messi were far from their best. Despite signing a new contract at the club, which would keep him till 2027, Neymar could be on his way out this summer.  He had joined PSG in 2017 for a whopping 222 million euros, the highest transfer fee in football history but has failed to live up to his expectations at the club.

There have several reports linking the player with Premier League clubs like Manchester United, Chelsea and Newcastle United among those. With a lot of time left in the transfer window so far, an exit for Neymar from PSG cannot be ruled out. The Paris giants are also reportedly interested in replacing head coach Mauricio Pochettino with Christopher Gatlier.

(The above story first appeared on LatestLY on Jun 27, 2022 09:48 AM IST. For more news and updates on politics, world, sports, entertainment and lifestyle, log on to our website latestly.com).