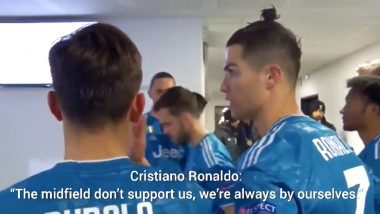 Juventus’ inconsistent form since football’s restart from coronavirus enforced lockdown continues as the Black & Whites were humbled by Cagliari in their latest Serie A fixture. Goals from Luca Gagliano and Giovanni Simeone helped the Islanders to a 2-0 win over the Italian champions. The Bianconeri have gone off the boil in recent weeks as they have won just two of their last seven games in the league. Cristiano Ronaldo Mercilessly Trolled With Funny Memes After Portuguese Star Fails to Score in Juventus’ 2–0 Loss to Cagliari (See Reactions).

According to Maurizio Sarri, the recent run of results are because of tiredness in the players due to the demanding schedule post lockdown. But one of the main reasons for Juventus’ difficulties this season, has been the lack of goals coming from their midfield. And after yet another poor showing, an old video of the five-time Ballon d’Or winner criticizing the Bianconeri midfield has gone viral. Cristiano Ronaldo vs Ciro Immobile: Lazio Striker Leads European Golden Shoe Race After Juventus Star Struggles Against Cagliari.

In the video, Cristiano Ronaldo could be seen having a chant with team-mate Paulo Dybala where both of them discussed the lack of support provided to the forwards by players in the middle of the park. ‘The midfield don't support us, we’re always by ourselves’ said the 35-year-old to which his Argentine compatriot clearly agrees.

Considering the dominance of Juventus in the Italian league, the Bianconeri have managed 75 goals in 37 games this season, which is less than the numbers managed by Atalanta, Inter Milan, Lazio and Roma. Out of the 75 goals managed by Sarri’s side, 49 are scored by the front three of Ronaldo, Dybala and Higuain.

Due to over-dependency on attacking players, Juventus have sometimes found it hard to win games when the forwards are not in their best form. Maurizio Sarri needs to solve the issue quickly as the Binaconeri restart their Champions League campaigns in August. The Italian side trails 1-0 to Lyon after the first leg in February.

(The above story first appeared on LatestLY on Jul 30, 2020 10:07 AM IST. For more news and updates on politics, world, sports, entertainment and lifestyle, log on to our website latestly.com).