Robert Lewandowski Extends Contract With Bayern Munich, Striker to Stay With the Team Till June 2023 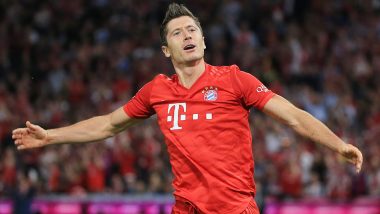 Berlin, August 30:  Robert Lewandowski has agreed to stay with Bayern Munich till June 2023, the German record champions have confirmed in an official statement. Penning a contract extension, the 31-year-old striker from Poland has committed his future to the "Bavarians" till June 2023, Xinhua news agency reported. Cristiano Ronaldo, UEFA Player of the Year 2019 Award Nominee Makes a Dashing Entry at the Event (Watch Video).

"Robert is for me the best striker in the world and for years a cornerstone of our team... We are very happy that he will play for Bayern for a long time," Bayern Munich's CEO Karl-Heinz Rummenigge said on Thursday. Lewandowski joined Bayern in the summer of 2014 and immediately made an impact as he scored 197 goals in overall 246 competitive encounters.

(The above story first appeared on LatestLY on Aug 30, 2019 12:31 PM IST. For more news and updates on politics, world, sports, entertainment and lifestyle, log on to our website latestly.com).