Mbappe, who won the Ligue 1 Player of the Year for the 2021-22 season, revealed that he has made his decision and it would be made known in a few days. The young Frenchman's move to Real Madrid has been rumoured for a long time now. 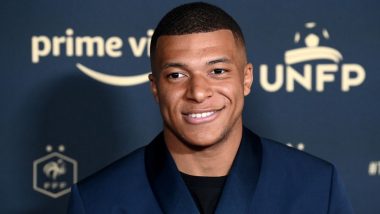 Real Madrid has reportedly completed the deal to sign Kylian Mbappe from PSG. The Frenchman's rumoured move to Santiago Bernabeu has been a long-discussed transfer in European football but now it seems that the deal has been made and Mbappe would be seen in Real Madrid's colours next season. Mbappe recently won the Ligue 1 2021-22 player of the year for his terrific performances in France's top-tier competition. He also shared that his decision is made and that he would announce it soon. Luis Suarez to Leave Atletico Madrid at End of Season

"I can’t say about my future but you’ll know very soon… it’s almost decided.  This isn’t the right moment but yes, yes… my decision is almost done. I will officially announce my decision on the future before I join the France national team in June," the star forward said. According to a report in Marca, Real Madrid have already agreed on a five-year deal and that the agreement was completed last week. The report also suggests that Real Madrid would not make the decision until Mbappe himself confirms the same.

Mbappe had reportedly travelled to Madrid and that is when the deal was completed. PSG have made a lot of efforts to renew the youngster's contract but it has been learnt that the latter has resisted all of those efforts.

(The above story first appeared on LatestLY on May 16, 2022 08:12 PM IST. For more news and updates on politics, world, sports, entertainment and lifestyle, log on to our website latestly.com).