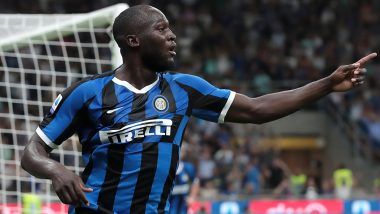 Romelu Lukaku could break a long-standing Ronaldo record when Inter Milan face Sevilla in the Europa League 2019-20 final. Lukaku, 27, has been in devastating form this season and has already scored in excess of 30 goals across all competitions. The Belgian striker now stands on the cusp of breaking a 22-year-old record set by Brazilian Ronaldo Nazario in 1997-98. Lukaku will partner Lautaro Martinez upfront when Inter Milan face Sevilla in the EUL final and will hope for more goals as they aim to lead Inter to its first European title since 2010. Sevilla vs Inter Milan, UEFA Europa League 2019–20 Final: Romelu Lukaku, Ever Banega, Lautaro Martinez and Other Players to Watch Out in SEV vs INT Summit Clash.

Lukaku and Martinez combined have scored 63 goals across all competitions this season making them one of the most devastating attacking pair in the top-five European leagues this season. Lukaku, who joined Inter from Manchester United last summer, has been the more lethal in front of goal and has already netted 33 goals in all competitions, 23 of which have come in the Serie A in which Inter finished just one point behind title winners Juventus. Sevilla vs Inter Milan, UEFA Europa League 2019–20 Final Live Streaming Online.

The Belgian has scored in each of Inter’s Europa League matches and has six goals from five outings, including a brace in the 5-0 rout over Shakhtar Donetsk in the semi-final. Lukaku will hope to carry on the scoring streak and net in the final. If he does score against Sevilla in the summit clash, the 27-year-old will equal Ronaldo’s 22-year-standing record. A double will make the illustrious record his.

He has 33 goals across all competitions this season and is one behind Ronaldo Nazario’s all-time record of most goals scored in a debut season for Inter Milan. The Brazilian scored 34 goals in his maiden season for the Nerazzurri in 1997-98 following his move from Barcelona. His goals streak still stands as the record for most goals scored by a player in his debut campaign for Inter Milan.

Ronaldo Nazario had scored 25 times in the Serie A and six goals in Europe. Lukaku ended his maiden Serie A season with 23 goals and has already scored eight times in the Europa League this term. A goal against Sevilla will help him equal R9’s long-standing record.

If Lukaku manages to score two in the final, he will be rewriting the record books and also possibly hand Inter Milan their first European trophy since 2010 and also their first title since 2011. Inter’s last trophy was the Coppa Italia win in 2010-11. Lukaku and Inter will hope they can end the nine-year drought against Sevilla.

(The above story first appeared on LatestLY on Aug 21, 2020 08:00 PM IST. For more news and updates on politics, world, sports, entertainment and lifestyle, log on to our website latestly.com).