Ronald Koeman Uncertain About Lionel Messi’s Future in Barcelona, Says ‘Nobody Knows What Will Happen’ 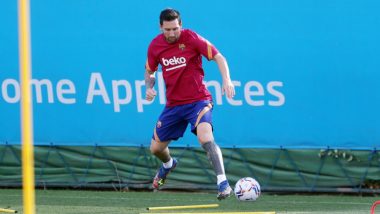 For a while now there has been a buzz over Lionel Messi’s future at Barcelona. It is said that Manchester City is keen on having him on board and is preparing for a grand bid. Ronald Koeman was recently asked about the same and he too sounded clueless about the same. When he was asked about the same and the Barcelona manager said that he is not the one who will stop him at Barcelona. Koeman also explained that Messi still has a contract with Barcelona but nobody knows what will happen in future. Barcelona Coach Ronald Koeman Defends Lionel Messi’s Angry Outburst.

"We will see about his future, still, he is a Barcelona player. Nobody knows what will happen with the future of Messi," said Koeman during the conference. Recently Messi was in the news saying that he is fed of being blamed for everything at Barcelona. The reaction came in after Antoine Griezmann's former manager Eric Ohlats slammed the Argentine for his deplorable attitude. He also said that Griezmann is having a tough time with the Catalans as Messi controls everything in the club.

When asked if he had spoken to Messi about the incident to which he said that after such a long journey it was unfair to speak to him about the incident. Also, he put said that everything was fine between Messi and Griezmann. He explained that there are enough pictures being posted around to show that Messi and Griezmann work together quite well on the field and even in the dressing room.

(The above story first appeared on LatestLY on Nov 21, 2020 09:38 PM IST. For more news and updates on politics, world, sports, entertainment and lifestyle, log on to our website latestly.com).