Giggs, on November 1 last year, had allegedly reportedly assaulted ex-girlfriend Kate Greville and caused her physical harm at his house in Greater Manchester. He was removed as Wales manager and replaced with Robert Page after this incident. 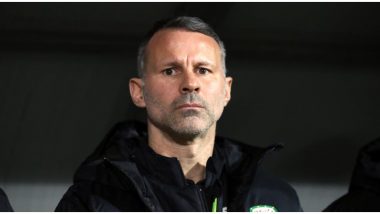 Giggs, a former head coach of the Wales national team also has been said to behave controllingly towards Kate between December 2017 to November 2020, where he allegedly humiliated, belittled, harassed and even used violence against her.

The 47-year old wasn't asked by the judge in a hearing, to plead formally but he has denied all of these allegations and stated that he would look forward to "clearing" his name. Currently, the legendary midfielder is on conditional bail and has been asked to not contact either Kate or Emma. Sports News | Wales Cancel News Conference After Reports Involving Giggs

After news of this incident surfaced, Giggs was removed as Wales head coach and Robert Page was appointed in his place. Page, the caretaker manager for Wales would be leading the team to this year's Euros.

(The above story first appeared on LatestLY on May 28, 2021 05:44 PM IST. For more news and updates on politics, world, sports, entertainment and lifestyle, log on to our website latestly.com).