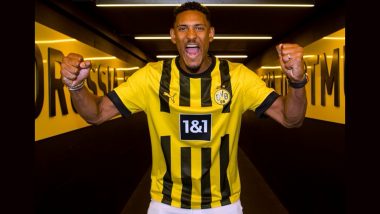 Berlin, July 7: German club Borussia Dortmund has sealed the transfer of striker Sebastien Haller from Dutch champions Ajax Amsterdam, both clubs have confirmed. The 28-year-old former Eintracht Frankfurt striker returns to the Bundesliga after putting pen to paper on a four-year deal with the Black and Yellows, the clubs said in an official statement on Wednesday. Top 5 Cristiano Ronaldo Transfer News ICYMI: From Not Joining Bayern Munich to Manchester United Salary Cut, Here's All You Need to Know.

"We are very pleased that with Sebastien Haller we were able to sign a seasoned striker who caused a sensation in the Champions League. He also knows the Bundesliga and has already proven his class and quality in front of the goal," said Dortmund's sporting director Sebastian Kehl on Wednesday.

Haller knows the Bundesliga very well as he played for the "Eagles" from 2017 until 2019 to provide 24 goals in 60 competitive matches. He most recently finished the season as a top scorer (21 goals) in the Dutch Eredivisie and ended up in third in the Champions League goal-getters standings after marking 11 goals, behind Robert Lewandowski (13) and Karim Benzema (15), reports Xinhua. FC Barcelona Unveil New Signing of the Summer Franck Kessie.

"It is a great stadium, but the greatest stadium is nothing without supporters. I can hardly wait to be able to feel the support of more than 80,000 spectators. Hopefully, we will achieve great things together in the coming years," Haller told the club's official website. Dortmund's new arrival received the number 9 jersey after the departure of Erling Haaland. The eight-time German champions clash with lower league side TSV 1860 Munich in the first round in the German Cup on July 27 before they host Bayer Leverkusen for their Bundesliga opener on August 6.

(The above story first appeared on LatestLY on Jul 07, 2022 02:31 PM IST. For more news and updates on politics, world, sports, entertainment and lifestyle, log on to our website latestly.com).